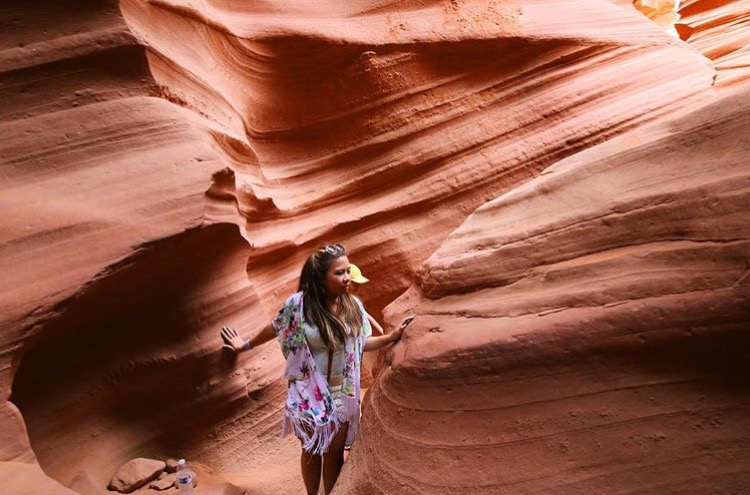 During the summer that had just past, my parents, myself, and one of my older sisters went on a family vacation to Arizona. The cool thing about having family in Arizona is that they can literally show you around and be wonderful hosts. My family and I met up with my uncle and my aunt and their two young children. Without them, we wouldn’t have road tripped nearly the whole upper half of Arizona (Arizona is a HUGE state; compare it to the country of Italy and the Philippines). While I have so many great things to show and talk about our road trips and my first coming to Arizona, I want to talk about one of my favorite parts/one of the cool attractions I saw in Arizona: the Lower Antelope Canyon.

Table of Contents show
1 Getting a permit to the canyon
2 Hiking to Lower Antelope Canyon
3 An eerie feeling
3.1 Pin It!
3.2 Liked this post? Share this:
3.3 Like this:
3.4 Related

Getting a permit to the canyon

The Antelope Canyon is a slot canyon located in Page, Arizona on the land of the Navajo Native American tribe. It is a top photographed natural wonder of Arizona and apparently took place for Britney Spears’ “Not Yet a Girl, Not Yet a Woman” music video. As my uncle’s van drove to the entrance to get to this popular attraction, we all had to obtain permission. Once we got permission, my dad and uncle found out that going through this canyon requires a deep hike to get inside.

My dad and uncle decided to not go since they felt they were out of shape and they didn’t want to be swept under the heat. So my mom, my aunt, my sister, and my cousin lined up to buy admission to get a group tour to go see the canyon while I sat with my little cousin. After that, we waited quite some time for our tour guide. We decided to look at the cool things that they were selling, which were a lot of inspired Native American jewelry pieces and merchandise of that sort.

Once we were called that the tour guides were ready (note that there were so many people that was there so people had to be divided into groups so each group was assigned with a different tour guide), we all walked with our group and tour guide at the same time to go towards the canyon which wasn’t a long hike but the hard part was getting down to Lower Antelope Canyon, which you would have to be careful with to watch your steps. Thank god there was a staircase that helped us walk down, for it wasn’t that, it would’ve been a harder challenge. At one point, our tour guide showed us to climb down the staircase by facing backwards and holding to the rails and stepping a foot back each stair. We had to then squeeze our way and walk up more and then we started seeing more space and cooler formations. We all started looking up above each walk of the way, admiring all the cool curvy edges and textures. We were also told by our tour guide that there were some rock formations that resembled the face of an animal or a human, in which those formations were named by what they seemed to resemble. The farther we explored Lower Antelope Canyon, I started to get this deep, sad feeling in me. When something bad had happened in a place, I can automatically sense it as if I have a third eye. I start feeling like someone is watching me or I know if there’s paranormal existence. It’s weird, I know, and you might not believe that. Our tour guide had told us a story that 12 hikers actually lost their lives in this canyon.

It happened on August 12, 1997, groups of hikers, mostly people from France, wanted to go see this canyon but a flash flood had just occurred at that time and swept them away and drowned them. That explained why I had felt like I had a drowned sensation being in there prior knowing that information.. I felt eeriness and chills creep on me from hearing that tragedy.

After a few hours walking in the canyon, we had to squeeze in small spaces again to go take the stairs up. It was great to be up again and there was quite a view looking above the slot canyon. Our tour guide showed a demonstration of how the canyon was formed using sand from the ground and a water bottle as the final thing. He said that thousands of years ago, the force of winds and water erosions carved these shapes and textures.

I definitely recommend this place if you ever have the chance to travel to Arizona. It has an interesting background to it and most definitely a natural wonder of the desert to witness.

The Rutgers Museum and Rutgers Gardens