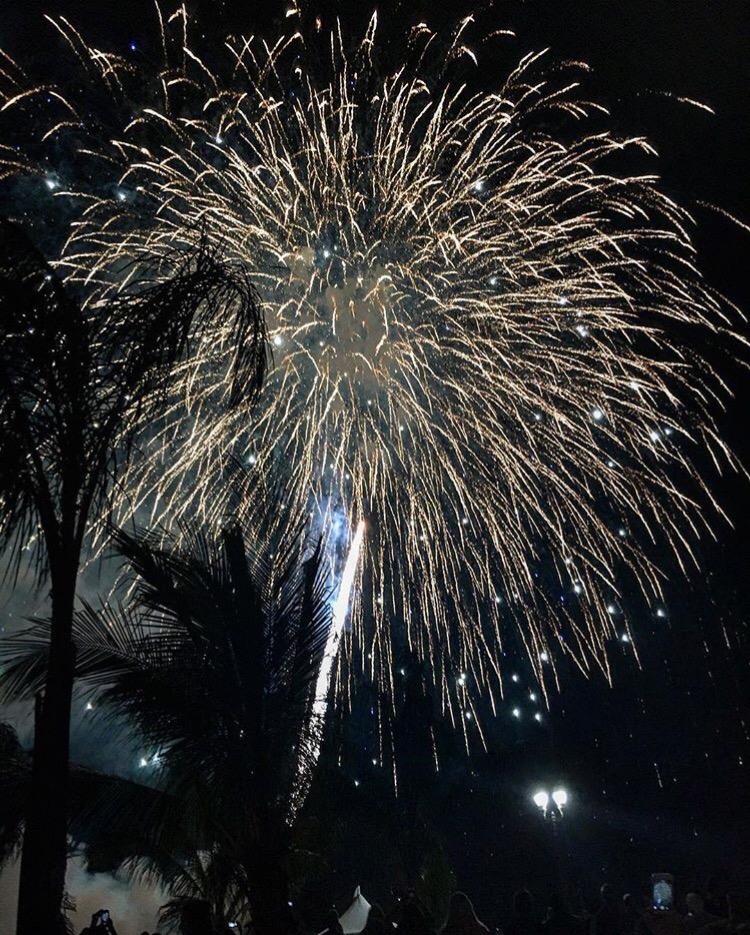 One of the most entertaining things you can see on the sky are firework shows. It’s an amazing experience to witness, no matter where you are, fireworks are such pretty man-made things to watch. Throughout my kind-of-young life, I’ve seen so many cool firework shows from watching them on Fourth of July near my neighborhoods as a child to now to being out of the country. Here’s a list of the coolest fireworks I’ve seen.

This is probably something lots of people witnessed as a child and if you haven’t yet… you will best believe this is the most magical thing you’ll see. The Disney themed music playing in the background and seeing fireworks shoot out from the Cinderella castle will make you believe “all your dreams can come true, if you have the courage to pursue them”, which you are pursuing by being in the magical world of Disney. The last time I came here was nearly two years ago and I vividly still remember and have this joy in me when I look back to this. It was a huge part of my childhood being here.

This is basically an installment of Disney World but located in California and a slightly smaller version of Disney World. The fireworks and whole theme are pretty much similar. How can you not love Disney when they play fireworks in every theme park?! I also saw a laser light and pyrotechnic show where Disney characters are dancing on the boat in the lake. They also had fireworks and awesome light and fog effects. Fourth of July (or Independence Day) is probably one of the most popular American holiday where there are fireworks being shot in the sky everywhere you go. Last 4th of July during the summer, my friends and my boyfriend hung out in Long Branch Beach, a popular beach within the Jersey shore, and we were literally sitting on the grass, a couple feet away from the shore, watching an awesome firework show. You could see palm trees in the shadow of the fireworks, lighting up the whole area. We also had been hanging out at The Tiki Bar, having ourselves some really good drinks, from the whole day to the night. The only downside is that it started pouring rain uncontrollably after the fireworks show and the whole holiday fiesta on the beach was done.

Being on the Ferris Wheel while seeing a firework show pop up on you is really pretty to see. I was on the Ferris Wheel with one of my best friends and him and I were scared riding it so we unfortunately didn’t take amazing shots of the fireworks. It was pretty nerve wrecking (for me especially since I’m terrified of heights and I get nervous going on this ride) but I happened to take an aerial “drone angle” picture of the fair, which is a fair that is held every summer to celebrate this county of New Jersey. Once again another Fourth of July time where they played fireworks. There’s something about seeing fireworks when you’re at the beach. The combination of the warmth you get from the summer night and the slight breeze and the smell from the shore relaxes you. For the past couple years since I was in high school, I’ve been seeing firework shows in Seaside Heights few times before and it was always a Jersey thing, to me at least. I saved the best for last. This was by far the most prettiest firework show I’ve seen (so far!!!). This summer, I went to Naples, Italy with my girlfriend (she’s from there). Monte di Procida holds this religious festival each summer and it comes with this firework show. There’s so many fireworks going on that it creates vivid patterns on the beach of Acquamorta in the town of Monte di Procida. So many boats line up in the shore to witness this half an hour long show. I also saw some drunk people partying on the boats before the show (as if it’s 4th of July lol).

I hope you enjoyed looking at this list of my favorite firework shows that I’ve seen and photographed. There are so many insane firework shows out there, I hope I’ll get to see so many more!