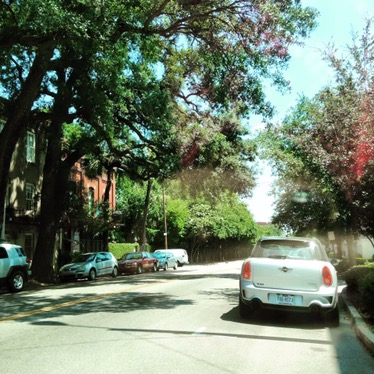 A historical looking yet one of the prettiest cities you should come see, even for a day like me, is Savannah, Georgia. My family and I took a road trip from our state New Jersey to down the south of Florida two years ago and one of our stops was Savannah, Georgia. Savannah is actually separated from South Carolina by the Savannah River. It is a historic district with parks, quaint neighborhoods, and cobble stoned areas. It is also known for its oak trees and blossoms. To be honest, this was my first time in Georgia and it honestly left a lasting impression on me. When we arrived, we passed by a memorial sign. This was from the Siege of Savannah during the American Revolutionary War that occurred in 1779. This city was once captured by the British and on October 9, 1779, the allied French and Americans in this city launched an attack to the British, only to fail and British still had control of this land until the end of the war. This sign was dedicated to those who fought for this city and you can also see historical markers around this historical area. When you walk around the city, you can see trolley buses driving around, where you can take a tour in. There are also horse carriage rides around the parks. I remember seeing a huge open square with a fountain in the middle. It was also hella hot in June and I was dying from the heat, wishing I could be under that fountain. The town was small but it was great to walk around in. My sister and I walked right into this cute little cafe and I remember experiencing the nicest customer service… the people in the south were extremely caring and had manners. My mother and I also walked into a merchandise store, I remember looking at this mannequin with what looked like a red dress. I had bought it and found out it was just a blouse that appeared to looked longer on the mannequin LOL. One of the things that struck our attention the most was the oak trees and weeping willows! You don’t find much weeping willow trees at all in New Jersey and I have never really seen them elsewhere. We also saw how beautifully structured the homes were as they looked so historic and were all colored in bright colors. The homes’ front porch steps had exotic plants being displayed and there were these trees hanging over the homes. Although, we were only here for a short couple hours, I can say there is no doubt that this city gave the feels of southern hospitality and gives you a feel for American history. I hope you get to stop by and/or explore this city or find yourself somewhere in Georgia!