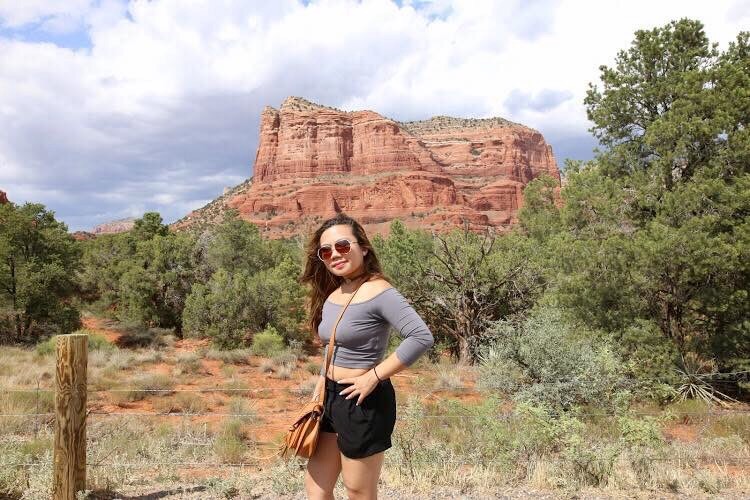 One of my favorite American drives takes place in the 48th state of the United States, Arizona. I came here to visit last summer with my family, whom also reside in Arizona, and my parents and sister. We road tripped through half the state of Arizona. One of the places we got to see was the Red Rocks in Sedona, Arizona.

About Sedona and its Red Rocks

It is one of the popular tourist attractions in the country and known for its red-like colored rock formations. It is part of The Coconino National Forest. If you come here with a car, you will be passing in by the Red Rock Scenic Byway and witness the nature wonders of Sedona. This is why I believe this is the ultimate American drive including in Arizona: Superstition Mountains, the Apache Trail, and Canyon Lake.

You will find yourself in awe by looking at these Red Rocks, which was formed from million years ago when the uplifting of the Colorado Plateau carved these rocks, while being in the process of making mountains (the same plateau created the Grand Canyon). If you looked at the textures of the Red Rocks, you will see layers of lines and layers of rocks formed on top of each other.

This place was actually even popular in Hollywood films, most specifically in the golden era of western films, and had famous actors shoot films here like John Wayne, Joan Crawford, Errol Flynn, and Elvis Presley. This place has so many hotels and has many cultural events held here that caters to visitors and it has great hiking and biking spots too.

Here are some photos of me by Sedona’s Red Rocks taken by my photographer sister: 7 Cool Things To Do in Avalon, Catalina Island