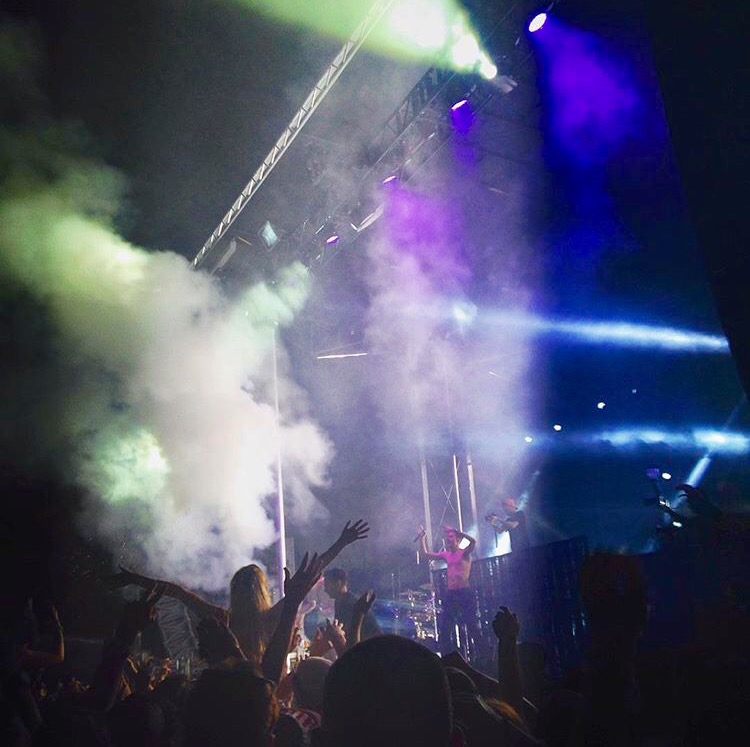 Besides going on my travel adventures or finding places locally, another thing I like to do, before I discovered I like going from place to place, is going to concerts. If you’re a music lover like me, you know going to concerts are essential and experiencing your favorite artists or music live is an experience that’s out of this world. Sometimes, I do really find myself enjoying myself in concerts and singing along with my favorite artists. It’s something everyone should experience once in their life. I’ve actually gone to so many concerts in my life, it’s kind of hard to keep track now, but I personally believe music can be such great therapy. Anyways, here’s a list I composed of my favorite concerts or artists that I’ve seen so far along with some tracks of theirs that I suggest you listen to. *All of these artists are in a variety of genres.* Mariah Carey, an R&B/pop/hip-hop artist, was the first artist I actually saw live at 14 years old. Actually, this was the first concert I’ve ever been to. I never really kept a lot of my pictures back then and this was before there were smartphones so I didn’t keep any photos of her until my mom showed me this at the time when we went to her concert. She’s one of the greatest singers from the 1990’s and of all time.

Some of my favorite songs from Mariah Carey: Always Be My Baby, Through The Rain,We Belong Together, One Sweet Day, My All, Emotions, Hero, Heart Breaker, Bye Bye I wish I had taken much better photos of Big Sean but I feel like when I go to concerts, I tend to take more videos. Anyways, I saw Big Sean, a rapper, with my boyfriend in 2015. A hip-hop and R&B singer named Justine Sky opened up for his show, whom I absolutely also love her music. This concert took place in a town near me and this venue was not the biggest; there were so many people watching his show and I had wish there were more space to move around, but nonetheless, he was great and performed new songs at the time and old but classic hits.

Some of my favorite songs from Big Sean: Beware, Bounce Back, Play No Games, Halfway off the Balcony, No More Interviews, all Twenty88 songs, I Know, Ashley Dan + Shay, a country duo, was my recent concert experience in December. I love how my friend introduced me to them and I’ve been hooked since. I listened to them when they just started off and now they’re getting more known. I love their music so much, they’re a combination of love songs and good country vibe songs. I always tell myself that their song, From the Ground Up, will one day be my wedding song!

Some of my favorite songs from Dan + Shay: 19 You + Me, I Heard Goodbye, First Time Feeling, Nothing Like You, Obsessed, From the Ground Up, Sway, Already Ready, When I Pray For You

Unfortunately, I didn’t take any good pictures of her from the time I went to see her. Avril Lavigne was a huge Canadian pop-punk, pop rock, and alternative artist back in the early 2000s. I didn’t get to see her up close and I was seated behind the floor but her singing live sounds just like her records.

Some of my favorite songs from Avril Lavigne: Complicated, When You’re Gone, I’m With You, Sk8er Boi, Here’s to Never Growing Up, Wish You Were Here, My Happy Ending, Hot G-Eazy hasn’t been around for long like the other artists I’ve mentioned before but he is a good rapper. I actually saw him live when I went to a rave festival that took place on the Atlantic City beach.

Some of my favorite songs by G-Eazy: Me, Myself, and I, Everything Will Be OK, Some Kind of Drug, Let’s Get Lost, Remember You, Drifting I had taken pictures of her but I completely lost them. Here’s a picture of my friend Karan and I at the concert for Kesha, an electropop and synthpop artist; it was actually his 18th birthday and we went to see her specifically for his birthday. He actually ended up meeting her (for the second time around) for a meet-and-greet. This was also long before her controversy with Dr. Luke and her wanting to get out of the record deal with him. We also saw Pitbull perform the same day she did and overall, it was a great fun show.

Some of my favorite songs from Kesha: We R Who We R, Thinking of You, Gold Trans Am, Die Young, Wherever You Are, Wonderland, Last Goodbye, True Colors I grew up watching The Disney Channel and The Jonas Brothers, 3 brothers that created an American pop rock band, started out from there. The concert was free to see along with Mariah Carey and Avril Lavigne (as mentioned above) because my mom actually has a membership with this hotel in Atlantic City that offered her free concert tickets to any concert so she tries to take advantage of these free concerts as much as she can and sometimes treat me to see who I would like to see. I actually love how Nick Jonas went solo and truly prefer his R&B music over the Jonas Brothers but these guys really bring back so much of my childhood.

Some of my favorite songs from the Jonas Brothers: Burnin’ up, S.O.S., When You Look Me in the Eyes, Hello Beautiful

Some of my favorite songs from Nick Jonas: Jealous, Push, Bacon, Good Girls, Avalanche, Nothing Would Be Better These two are my favorite rappers. I actually saw both of them from the same concert called Under The Influence Tour along with other hip-hop artists like B.O.B, Joey Bada$$, Trinidad James, and more in 2013. It was also my first hip-hop concert.

Some of my favorite songs from Wiz Khalifa: Raw, Ass Drop, Hope, Still Down, We Dem Boyz, Zoney, City View, Young Wild & Free, See You Again, Black and Yellow, Work Hard and Play Hard, Time, Up in It, Remember You, The Plan, Medicated, Dreamer, Never Ever, I Choose You, Too Late I used to love post-hardcore, screamo, and pop-punk music (and still listen to them occasionally, just not how I used to keep up with them). One of my favorite bands that I really loved from when they began to now is Sleeping With Sirens. I remember one time I was going to meet my friend for one of their concerts and being stupid, I didn’t buy the tickets in advanced so I went there and unbeknownst to me that the tickets were going to sell out, I stood in line just to find out the person in front of me got the last tickets. I was so disappointed and upset because my friend was already in the concert venue but when he came back, he got me a poster signed by the singer Kellin Quinn himself!! I ended up seeing them when I went to Warped Tour in 2012. Moral of the story is if things don’t work out in the first place, it can always work out later.

Some of my favorite songs from Sleeping With Sirens: If You Can’t Hang, All My Heart, Who Are You Now, Tally It Up, Settle the Score, Postcards and Polaroids, Your Nickle Ain’t Worth My Dime, Let’s Cheer to This, Heroine, Sorry I saw the DJ, record producer, and mixer Kaskade, one of my favorite EDM artists, live at Electric Daisy Carnival of last year. His set was amazing and EDM festivals/concerts are my favorite kind of concerts because of the visual aspects that come with it: the strobe and laser lights, the visual imagery on the screens, fireworks that shoot out, and the smoke that gets released.

Some of my favorite songs from Kaskade: Atmosphere, Us, Disarm You, Whatever, A Little More, Mercy, Phoenix, Fakin It, Never Sleep Alone, All Good Things Another one of my favorite EDM djs, Alesso, really knows how to put on a show and his music played out live gave me goosebumps. I saw him live when I went to Electric Zoo in 2015.

Some of my favorite songs from Alesso: Heroes, Take My Breath Away, Under Control, Sweet Escape, Scars, If It Wasn’t For You, In My Blood, If I Lose Myself, Cool, Falling

I didn’t get to take a picture of them and I don’t remember which EDM concert or festival I saw them in but they are also one of my favorite EDM djs that I was lucky to see live.

Some of my favorite songs from The Chainsmokers: Closer, New York City, Paris, Roses, Inside Out, Something Just Like This

Other Ones Not Mentioned as of 2018

…And there you have it. A list of my favorite artists that I saw live or concerts that I thoroughly enjoyed.

What Exploring My Home State Helped Me Realized