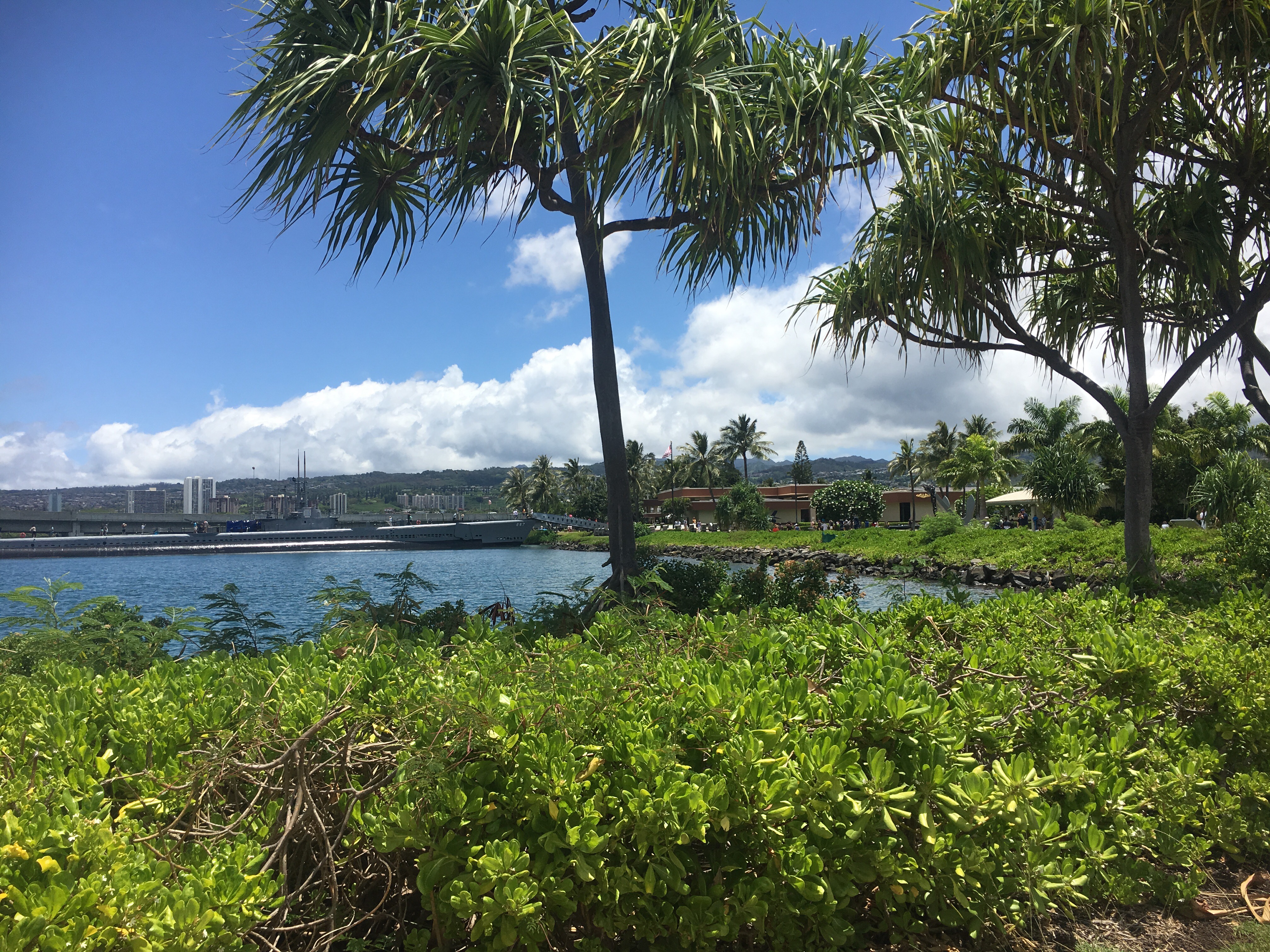 We have read all about it in our history textbooks. It was an important and crucial time in American History. It happened on the morning of December 7th, 1941. Pearl Harbor, a lagoon harbor with a United States naval base, was attacked by the Imperial Japanese Navy Air Service. This tragic event killed over 2,300 Americans and destroyed all of the ships. On my trip to Hawaii, I went to visit and pay my respects to the sacred site of Pearl Harbor with my friends. What was even remarkable was the fact that my friends had lived in this condo right across Pearl Harbor (my friend’s cousin actually lend us his place to stay in for the whole trip), so our views were always of Pearl Harbor.

If you’re ever on the island of Oahu, Pearl Harbor is one of the places you have to definitely stop by to. For me, I love history and checking out actual historic sites always means a lot to me. So first things first, we arrive there with our tour guide and a group of tourists, mostly consisting of families. This was part of the package of the city tour guide, where he would take us to Pearl Harbor first then drive us around Honolulu and show us known places in the city.

We were given our Pearl Harbor Tickets. These tickets would guarantee us to watch a short movie with actual footage from Pearl Harbor. Table of Contents show
1 The beginning of the tour
2 Touring the USS Arizona Memorial
3 “The Black Tears”
4 Exploring around Pearl Harbor
4.1 Pin It!
4.2 Liked this post? Share this:
4.3 Like this:
4.4 Related

The beginning of the tour

So the tour guide let us freely go around the place and told us to come back to meet him at his tour bus by 10:50am the latest. By the time we hopped on the line for the movie, it was slightly a little bit later than the time on the ticket of 9:45am and there were problems with that with the guard because he had to let the other people who were scheduled at 10am to watch the movie since we missed our time slot.

Disappointed and thinking we weren’t going to watch the movie at all AND have time to go to the USS Arizona Memorial, we actually ran into this couple who was with another worker and they said that their tour guide had made them be at fault to arrive late for the movie and they had recognized my friends and I being on the same tour as them. The worker had talked to that guard and eventually fit all of us in to watch the movie after the prior session.

The movie was a heart-wrenching documentary and even more touching was the fact they showed actual footage and photos from during the time. It explained what was happening before the attack, during, and the aftermath. We exited the movie theater and were directed to walk towards this boat that would take us across to the USS Arizona Memorial, which is a memorial structure placed on top of the USS Arizona ship that sunk when the Pearl Harbor attack happened. It was the ship that had the most casualties with 1,177 men that died on board and it is known to be the greatest death toll on a United States warship. The USS Arizona is sunk down at 40 feet underwater. In less than 10 minutes, we arrived at the USS Arizona Memorial. Here were the pictures captured: In these next photos, you can see oil rings floating atop of the water. These are still oil that is being leaked from the USS Arizona ship even after it sunk down. These oil rings/droplets are called “The Black Tears” and are estimated to still be coming out of the ship in the next 70 years. They say that if the oil stops leaking, that means the last Pearl Harbor survivor has passed away (urban legend). Here is the stone wall that is displaying the list of the victims in the USS Arizona. Before taking a boat back on the land, my friends and I had a picture taken together in there. We decided to match and wear blue and white stripes; with its colors to represent and be in honor of the Navy men who lost their lives in Pearl Harbor. When we got back on the land of the visitor center/park, scrolling through the park, you can see displays of torpedos, Navy related sculptures and missile sculptures. You can see a list of Pearl Harbor survivors displayed on some blocks. You will also come across this huge anchor, which so happened to be attached part of USS Arizona. It was painted on to preserve it. There are a couple engraved quotes aligned with each other from influencing and famous leaders like this one from President Franklin D. Roosevelt, regarding the attack on Pearl Harbor: There were scratched-off poster boards featuring maps and facts of what happened to Pearl Harbor. Below is a close up of a map indicating which ships got damaged and sunk. Part of the visitor center/park was the USS Bowfin, which you can tour around inside but it was a separate purchase to go see inside, so we didn’t get to see it. You can see it from the picture below (where the people are standing). Hope you enjoyed reading through my visit.