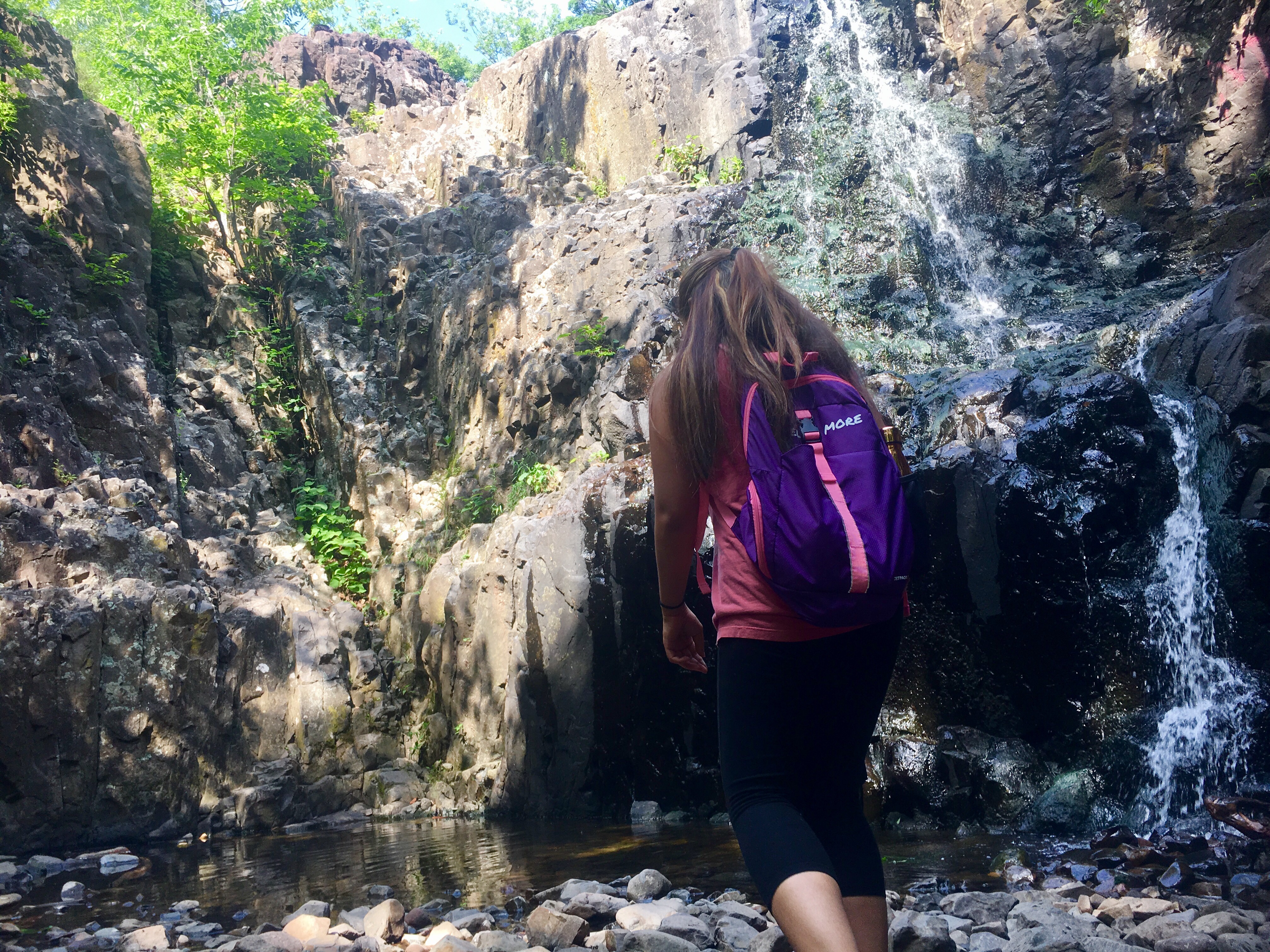 I think that sometimes I really should be more on the move to explore my state more. Having to meet people who visit New Jersey from a different country or state inspires me to be grateful and explore the state that I’ve been raised in. I really do like my state of New Jersey but often times, some of us overlook where we are from and find ourselves desiring to be in places that aren’t anything much like home. There are lots of places you can find from where you are that will lift you up.. most especially nature. There’s something so soothing finding yourself surrounded by nature’s beauty, especially hiking Hemlock Falls in South Orange, New Jersey.

My dad’s friend from the Philippines has his daughter, Joy, visiting from her internship over here in New Jersey and my family decided to host her before she leaves to go back home. I consider her like family. My family, including I, decided to show her a couple of places while she’s here to visit and the idea of going around to show someone my state and act as a tour guide makes me, even more, want to explore my state. I miss hiking and looking down from mountains, so I decided to make half a day out of it the other day.

I drove my sister, Joy and I to the South Mountain Reservation, which is located in South Orange, New Jersey. It’s very close to the well known Jersey college of Seton Hall University. As I was looking for the park where the GPS was taking me, I saw a small parking lot with some cars and it has a wooden forest caving around it, which I assumed was parking for the hiking trails in South Mountain Reservation. It was an unmarked park but from most hikes I’ve discovered, it will appear to be incognito like that. When you get there especially as your first time, you will automatically see no marked trails or a map. You have to simply find other people walking by and ask them for directions depending on what you’re looking to find without a map. Our goal was to look for the Hemlock Falls in South Orange, New Jersey. On some sites, it says to go by the Yellow Trail  (Lenape Trail) for the easiest way to get to the falls and you will have to look at trees with yellow painted on them. If you don’t notice to look at each tree, you CAN miss out on the yellow markings.

We ran into someone who was able to direct us to the falls. We walked straight to the open forest and then we were lead to these stairs. We just kept walking straight then took a right somewhere, which was a BAD idea. The person’s directions were pointing to go straight then the rest of the directions just sounded unclear. With little service and not being able to download a map on this hiking app due to having to pay, and when I did find a map elsewhere but it was blurry and not clear to follow, we were officially lost and I thought I would lead the way. It just led us to see roads with cars passing by through the trees and we ended up in a picnic area. I had a good feeling we weren’t in the right way. Remind me again why it’s important to have a map before.

I thought maybe if we go back to the same path we were at and see if there are other people to ask for more directions. Turned out, that was a good idea. Here were things we found along the way back:

We then saw this path we were familiar with since we passed it before and in which someone pointed out to stop where you can see this “T” forming the path. There were two ways we could’ve gone from there and we could’ve gone to take a straight but our mistake was we took a right, thinking it was the way because it was a bigger path and that’s why we were lost for a short bit. The path going here didn’t look like a path and we thought it was off of the trail but it did take us into Lenape Trail/Yellow Trail. We had to go step down to these steep rock steps to get down to where the falls would be and we saw a stream from down under. We finally found the waterfalls of Hemlock Falls!! What could’ve been a 5 mile hike took us somewhere relatively longer to finish. So the Hemlock waterfalls weren’t as big as expected; it was not too tall and there were little skinny falls running down the cliff but it was still pretty and something I haven’t seen in my state yet. It created a little pond with lots of rocks surrounding it.

There is this other pond adjacent to it with a bridge: There were these stairs that we went to and we thought it would lead us back to where the parking lot is but we discovered we walked on this cliff on top of the waterfalls and saw a beautiful view of the forest. This also included a bench that people can sit on. We saw these guys swimming on this river below (where we do not know where it is located but it was not next to the waterfalls). Then we turned back to where we came from through the steep rock steps and headed back to my car. Overall, what do I think? Well, the hike was really easy but what made it difficult were how tricky some of the trails branched out. It’s very poorly marked. But the Hemlock Falls in South Orange, New Jersey is a beautiful place of nature here in Jersey and it’s not a bad thing to get lost sometimes, as a prime example how we were able to find a scenic overlook after the waterfalls. There is also lots to explore in the forest because you will come across random things, wildflowers and you will see deer wandering through (maybe even snakes, yikes!). I do recommend you get more prepared on hiking this unlike us, who were a bit unprepared like studying the area and map and we forgot to spray on insect repellent. Look at my helpful tips on how to get prepared for hiking.