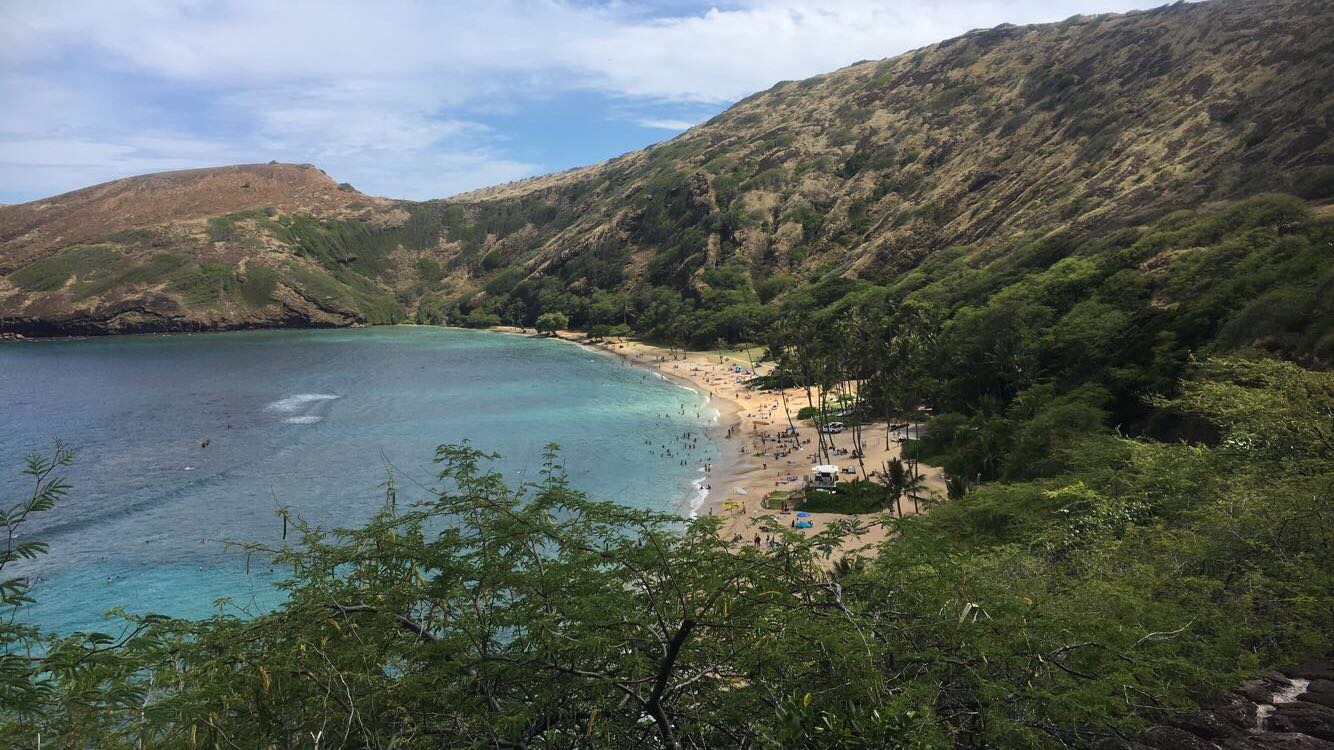 Located in East Honolulu of the Hawaiian Islands lies a volcanic formation that created the Hanauma Crater about 32,000 years ago. There were volcanic vents along the southeast shoreline and it opened on the sea floor, with steam explosions and eruptions shattering the sea floor and building tuff. Wave erosions cut through the wall of the crater, creating what we see now: Hanauma Bay. Hanauma Bay is a popular O’ahu tourist destination that many visitors love to swim and snorkel in within the shore.

Some facts about Hanauma Bay: It appears to be a beautiful body of turquoise water and it looks to be tranquil BUT that’s not always the case. The bay can be a deadly trap for some tourists and over the past years (from 2008 to 2013), about 9 people have been reported to die from snorkeling there. During my visit there in May, my friends and I arrived at the bay to have a day of snorkeling and swimming and it’s not hard to see how snorkeling in the bay can be dangerous, from my own personal experience. After paying a fee of $7.50 to get in, all of the people who paid were led to an auditorium to watch a short video on safety, procedures, and rules (like don’t touch, catch, or feed the fish). I think this video is important to show all visitors to be aware of how important this conservation is and to possibly save their lives. We laid our stuff down as we walked down the stairs to the bay, snacked a little, and I went jumping in the clear turquoise waters to go snorkeling.

Before I actually went snorkeling, I noticed this curved opening by the shoreline as if it came from a Moana (Disney movie) scene. My friends and I thought it was cool how it did that but then I remember when my mom sent me a short Facebook video on riptides and how to spot one after leaving the bay…

As you can see on the picture above, it looks like a calm pretty beach with calm waters but truthfully, where you see the curved opening, that is an indication it is a riptide (a strong current of water that is turbulent and abrupt that pulls toward the sea). Not knowing that during the time I went, I quickly couldn’t wait to swim into the sea. I got on my snorkeling goggles and went out and swam. The swim wasn’t as smooth as I wanted it to go and I even consider myself a good swimmer.. there was something off about it that I felt while I was there. I felt water coming in and out of my mouth when I was just floating above and that wasn’t normal.. it wasn’t my snorkeling gear either.. after my first swim, I was like “I’m going back and out of here!” I tried to swim straight forward but it felt exhausting and it felt like I was fighting the waters. If that didn’t work, I went and swam more parallel and somehow, I was able to swim my way more forward.

The thing is for riptides, if you ever find that you are stuck in one, try to swim parallel until you know there isn’t any in the area of the water to hinder you from getting back ashore. Also, do not try to fight the water by swimming directly straight because it might overpower you and it can cause you to tire yourself and then panic (which can lead to drowning). For more signs to look out for a rip tide, look for gaps between the waves and for discolored water. And it really makes sense to me more now how people have drowned from snorkeling in this bay..

What I find mind-boggling is that it’s even harder to spot these on what appears to be calmer beaches like this bay because it’s hard to tell. But after a while resting, I went back into the water and swam away from where the riptide was occurring.

It’s important to be cautious when snorkeling and swimming especially if you aren’t too experienced either. Taking in the beauty of this crater and the nature around me was what I wanted to focus on and not the hard time I was having out there. I did spot a couple beautiful colored fish but not as much as I hoped to see.

The bay is really nice to visit so don’t let your fears hold you back from visiting Hanauma Bay! Snorkeling is always a great excursion to take on at least once, especially while you’re in the Hawaiian Islands.