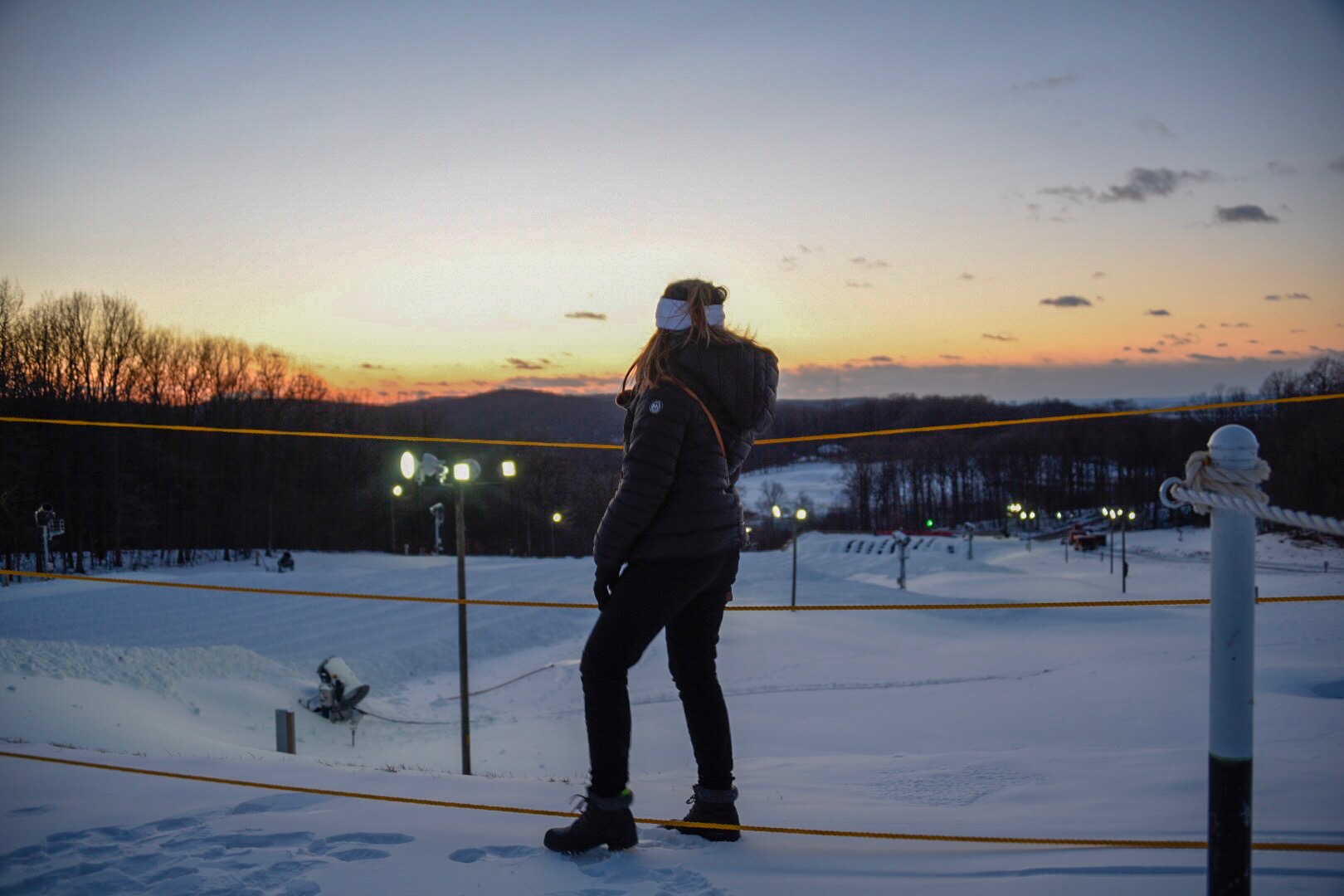 Most of us are aware about the “bomb cyclone” weather that hit us in the East Coast in the recent week. We were hit by Winter Storm Grayson with dropping temperatures, unbearable cold weather, blizzard conditions, and heavy winds. It’s been crazy and I’m actually writing this right now as my air flight has been delayed twice, yesterday and today, and even the fact I had to move to a different airport over to the next state (Delta and JFK Airport, SMH). Anyways, with that being said about this weather, I didn’t let it stop me from having fun over the weekend to go snow tubing!

I’ve been wanting to plan to go snowboarding or skiing as a pre-birthday celebration with friends before I went away. Unfortunately, everything was over the top expensive but I knew I wanted a winter getaway to appreciate my status as being born as a winter/January baby. As I was searching on Groupon, as per usual, I found a deal to go snowtubing and took on this last minute plan and choose this as an alternative to my original plans. I drove my friends to Pennsylvania and we drove to the city of Lebanon for what seemed like an eternity. It was further than the famous Pocono Mountains and I didn’t really expect the drive to be longer than what I imagined. The views to the drive there was so scenic. There were open lands of nothing but barn-looking houses with its green grass covered with snow. As we got closer to our destination, we were welcomed with mountains and the blue from the winter skies and snow reflecting from its essence made the place look like a magical winter wonderland. The dead tall trees still made the roads whole as we were going up higher elevation and riding up this mountain. The roads were getting longer and the sun was slowly disappearing in early day. I missed my exit on this long road once and had to turn back around once. Then we arrived at our destination to Iron Valley Golf Club. In the summer, this place turns into a golfing course then in the winter like during this time, they turn into a place for snow tubing. We walked out of the car but all we felt was the cold wind blowing against us and we were freezing like crazyyy. During the road trip, we even stopped by a Skechers store on the way to buy another pair of socks (all of us had 2-3 socks layered on haha) and one of my friends bought a pair of winter boots. He took these amazing photos below (follow him and his work on Instagram @aafernands): We went inside and warm ourselves a bit, used the bathrooms, and got our snow tubing passes. We eventually accepted that we have to face this brutal weather one way or another especially since I chose this day to celebrate. Some of us were terrified to go down the slope. It was a 133 feet vertical drop at an altitude of 945 feet. It looked scary and it kind of was… As night was quickly approaching after sunset, we took our tubes. I had no courage to go alone and my friends and I went together to go down the slope. The first time I gone down those slopes, I remember being taught by the instructor how to lay down properly inside the tube and I was in the front of my friend. I had to hold onto her legs while we went down together. We were pushed without warning and with my eyes wide open, I was screaming on the top of my lungs and felt butterflies on each drop. I learned the lighter the person is in the front, the more faster you’ll go speeding down the slope lane. But a trick is a person can manipulate their weight into so much lighter by leaning forward in their tube. I watched so many people go zooming and flying especially when they were solo and sometimes, you’ll end up hitting the red bags of sand (to stop people flying further)… it was intense and a thrill to watch, just like how it felt. It made me feel like I was on a roller coaster almost and I despise roller coasters since I have a huge fear from going on them but me, not knowing how scary snow tubing was going to be, thought this was a great idea. To be honest, it wasn’t at first because of how intimidated I felt but in the end, I felt like I truly loved that feeling of dropping through ice.

Snow tubing is a really fun winter activity for sure. It really puts you to the edge. The weather was extremely hard to handle but with the fun, you instantly try to forget that for the moment. I didn’t want one of the coldest days of the start of the year to hold anyone back from going on a road trip and trying this out.

After going down on the slopes, to get back up, our tubes were lifted while we were sitting down while we went up being pulled up by a rotating rope. It felt really fun and I enjoyed the views of the sunset and scenery below us. In addition to this, we went out to eat at a restaurant called the Blue Bird Inn by the borough in Lebanon, Pennsylvania called Cornwall. We were still at an altitude of 600 ft up. Blue Bird Inn is considered as one of the oldest operating eatery inn’s since the early 1900’s. The Inn used to be called Molly’s Tea Room, which used to be one of the illegal speak easies that was around the Prohibition time. They offer American dishes. Upon arrival, we had to wait but it felt like a short wait. My friends then surprised me with a nutty caramel flavored birthday cake and I blew a candle and made my wishes. Even though I know that it wasn’t officially my birthday yet, I hate the fact that I am aging and I don’t want to celebrate my age but to celebrate this milestone of growth in life. I still feel like I’m 18! May other January babies have a great birthday that you’ll always remember!