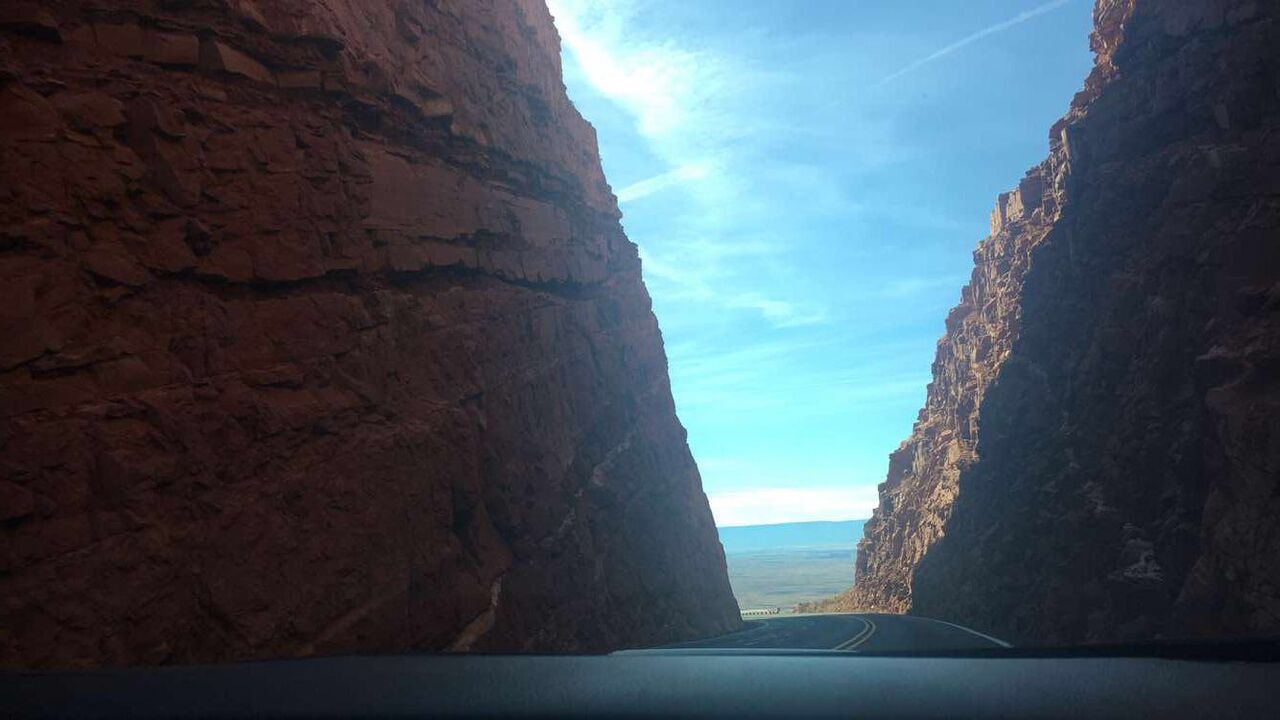 A few weeks ago when I went to visit Arizona, my parents and I made plans to go take an almost 4-hour road trip to the Grand Canyon by driving up to Northern Arizona. The goal was to go to the Grand Canyon and see two more major attractions (sadly, one of them wasn’t accomplished at the time). When it comes to traveling, sometimes one of the best parts of it isn’t the destination but rather the journey to get to the destination.

A road trip through the Southwest was nothing new to us as we have tried it almost two years ago when it was the first and last time I was in Arizona. Southwest road trips are ultimately my favorite because I love passing by huge mountains and canyons and deserts. To me, it feels like the epitome of the all-American road trip that you see in movies and dream about (does Thelma & Louise, National Lampoon’s Vacation, Into the Wild ring a bell?). Also, Arizona has diversified nature in the various cities you’ll come by when you drive around.

Some of cities up to Northern Arizona are seriously noted as the most scenic ones throughout the state. We came by some of the places that I will be mentioning at least twice (passing through and going back home). Of course, you can’t do a road trip without a vehicle. We rented a 2017 Nissan Altima car and I was able to gain some experience by doing some driving through this state (fun fact: Arizona is known to have one of the safest roads in the country). Here are some of the best places I’ve passed through this road trip:

Phoenix is the capital of the state and it is one of the more well-known cities. If you’re coming from more south of Phoenix or Mesa (where we were from), you’ll go through the highway and pass by the capital. We stopped by in the city when I had forgotten my camera’s battery so I went to a Batteries Plus Bulbs store to buy one and to also get a really delicious Whattaburger burger. If you believe you want the ‘city’ life, this is the place to go to but unfortunately, we didn’t really explore it this time. One of my favorite places to stop through the whole road trip… also it is one of the most unforgettable places I’ve seen because of how picturesque it is. When you go through here, you will automatically know and feel that you’re going up in higher altitudes. I drove through here and it was actually my first time driving through the highway where there were cliffs next to me WITHOUT any rails. Also you’ll feel the roads going up and down drastically. I honestly loved the thrill of it, even though I was terrified since I’ve never driven so close to cliffs. When we were coming back our road trip, we stopped by the nationally acclaimed Rock Springs Cafe located in this city, where they have really good jerkies! We stopped to this city for a restroom area after driving less than an hour from Black Canyon City. It is probably one of the most prettiest and most scenic restroom stop I’ve been to. There’s a sitting/picnic table under a gazebo by the restrooms. By standing there, if you look behind you, you’ll see gorgeous mountains in the distance and hills with plenty of green plants. The breathtaking Flagstaff is one that puts the icing on the cake. A lot of people believe Arizona is just a hot desert with nothing but the sun blazin’ but the truth? In Northern Arizona, you’ll find snow and cooler weather… and pinetrees. It also has the tallest mountains in the state called the San Francisco Peaks (with the highest point called Humphrey’s Peak) standing at 12,633 ft! When you’re driving through Flagstaff, you will be able to visibly see that mountain range in every corner. Before heading out to the Grand Canyon, you’ll be going through the city of Williams. It is known as the gateway before you make your way into the Grand Canyon. It is the city with the historic ‘Route 66’. You can find a lot of American-styled shops there and restaurants that have been around since the very early 1900s. On the way, we were looking for an internet cafe to stop by but we actually ended up in Flintstones Bedrock City, a theme park with a gift shop and small restaurant dedicated to The Flintstones (such a memory lane and such awesome cartoon/movie characters they were!!). You can even go camping there with your RVs. Upon reading reviews of people saying the attractions looks very run down, I think it adds to the look of the park with its stone age time and having a sense of humor to go there is needed! How can I not list the beautiful ol’ Grand Canyon? Going there is just as remarkable! At least when you’ve passed the gates after you pay for the admission fees and when you’re driving out of that mountain… It is by far one of the most insane drives I’ve been on. We drove aside the Grand Canyon during the day, stopped there for hours at Mather’s Point, drove off, saw the Grand Canyon once again peaking in between the trees and its other scenic stop overs on the road during a pink/purple hued sunset (did not take photos because we did not stop but imagine what a beautiful scenery I was witnessing before my very eyes!), and saw thousands of vividly bright stars light up the sky while driving out of the mountain next to the Grand Canyon. It is too unreal and unpredictable at the time to even fully touch upon to describe. Page, Arizona, is known for the most epic Southwest monuments and national parks found in the state (such as the Horseshoe Bend, Antelope Canyon, Lake Powell, and more!). Almost by the border of Utah, Page is within the Navajo Nation, and you’ll discover what makes this place truly famous for (to me, I’ve seen a lot of red rocks and sand surrounding the whole city!). Last but not least, I saved ONE of the best for last. Highway 89, part of Page, Arizona, and sharing some of the border with Utah, you cannot miss this drive AT ALL. If you’re coming out of Page, you’ll be witnessing the magnificent views of the Echo Cliffs and the Vermilion Cliffs. Not to mention, you’re basically crossing over to another state (Utah) with this one highway alone. The Vermilion Cliffs went on for miles and it is so close and massive that it feels like you can glance your eyes over the whole time. What amazes me about these cliffs is how people were able to cut through them and build a highway between them… you have to love engineers and construction! Arizona has so much to offer and I am in love with every view the state has to show! What was one of the most awesome road trips you’ve done?