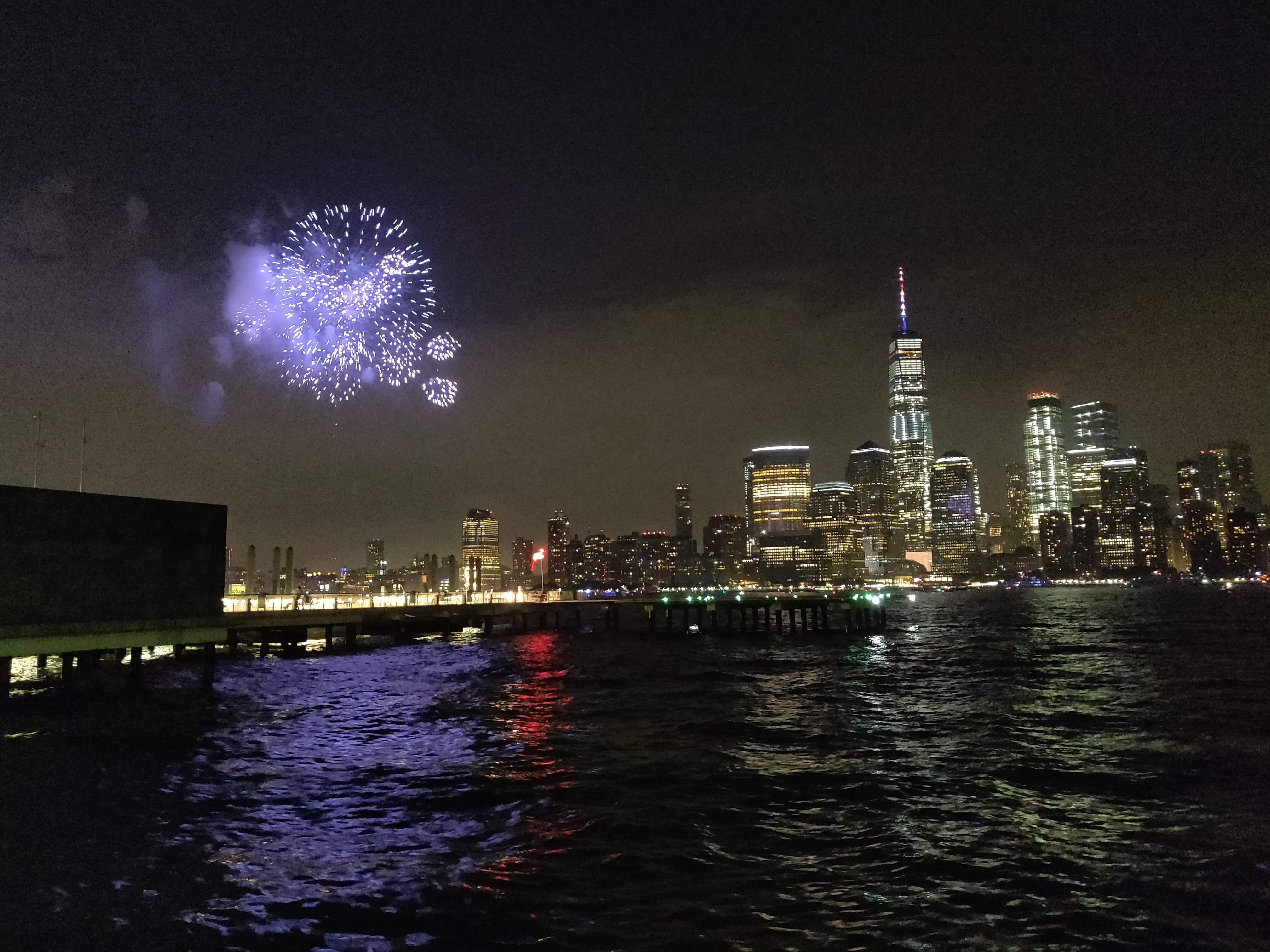 I hope everyone had an amazing Fourth of July yesterday! It was an exciting day for my country with so many awesome festivities to do with friends and family. Independence Day means so much more to me beyond the rich and triumphant history; it’s the feeling of liberation and the inalienable rights that every American is given the moment they are here. Besides New Year’s, the 4th of July is one of the main American holidays within a year to celebrate with humongous and live colorful fireworks. There’s no better way to celebrate than to be at “Chilltown”, Jersey City. Across the Hudson River and Liberty State Park of Jersey City lies the famous Statue of Liberty, the iconic symbol for patriotism on Liberty Island, which actually showed on the news yesterday that some woman climbed up to the base of the statue for a protest. Across Jersey City is the view of the New York skyline and the Freedom Tower (another name for the One World Trade Center), the rebuilt World Trade Center after the terrorist attacks on September 11th. A lot of these landmarks surrounding Jersey City has represented the American dreams that so many Americans have tried so hard to build and the resilience and strength that they showed after so many devastating tragedies that shook the country. Being here meant to me that I was given the freedom, among over 300 million Americans, to be able to do what I do like such as traveling, discovering the beauty and history within places, and doing things like this: celebrating the fact I am so proud for everything this country represents and all the unity it bought.

My friend Oyebola and I!

My friend and I walked across Liberty State Park and within a few short minutes, you can find the Empty Sky Memorial. This is a memorial that is dedicated to the 746 victims during the 9/11 attacks that were New Jersey’s residents. The architect of this memorial features two walls that reflect a mirror of the sky and changes among the sky’s hues. Yesterday was quite cloudy, so that was what we saw on the walls along with the victims’ names engraved on it.

We were planning to go to the Freedom Tower by crossing around a harbor and explored around looking at the tall buildings within the city parallel to us and other cute places like restaurants. After several minutes walking around the harbor, we arrived by the rail and asked for directions to get to New York to visit the Freedom Tower area. While we were asking, we were told by two workers that once we get off the light rail on Essex Street and go around Exchange Place, there is actually going to be a music festival with some foods, drinks, and carnival rides around there! The best part was the artists who went to perform that night. Change of plans, we took the rail and hung out at the festival all night. I really love the fact how so many of my friends are just like me. We love exploring to different sections of a city and what’s even funnier is when we unexpectedly make plans to arrive at a cool event like this festival called the 50 Star Fire Show. Running on its 5th year, we lined up and got into the festival with a free admission, and walked around to see the venue to find some food and drinks to grab. Since we made it early before the headliner came out, we decided to go stand by the stage already (we made it to the very front) and watched the other performers, which featured gigs from some Haitian artists, DJs, and other local artists around the state. After hours of watching these performers, we were anxiously waiting for… Snoop Dogg!! Before heading out to the stage, my friend and I were trying to cross the street to get by the stage and a golf cart passed by us right in front of us with not even a feet away, carrying Akon and his entourage!! We were told Snoop Dogg would come out at 8pm but he ended up coming on stage to perform by 9pm. When he started performing, it made me so excited that it felt unreal that he was actually right there a few feet away from the stage since I am a big fan of him since not only did he make some really cool classic songs, he is in fact one of the biggest ’90s rappers. Sometime during his performance, he bought Akon out and they did a few duets until Akon started singing his solo hits. The crowds were chanting for so long to get Snoop Dogg out and the whole concert went by pretty smooth.

Shortly after the concert ended, my friend and I heard the fireworks show was starting as we were walking down the street among hundreds of people. We stood by the edge of a harborside boardwalk and watched the beautiful fireworks soared into the night sky among the New York skyline with the Freedom Tower, lit up with LED colors of red, white, and blue on its antenna. Gabby’s tips: If you ever plan to go to Jersey City for 4th of July next year, be sure to attend the 50 Star Fire Show Festival (highly recommend!) and try to make it early to get to the front. Try to leave the concert a little earlier before it ends to avoid getting out of the crowd of hundreds of people that would walk back after the show ends and to make it to a highly visible spot before the fireworks show up! Also, bring some $$ for drinks and food, but otherwise the whole festival is free to the public.