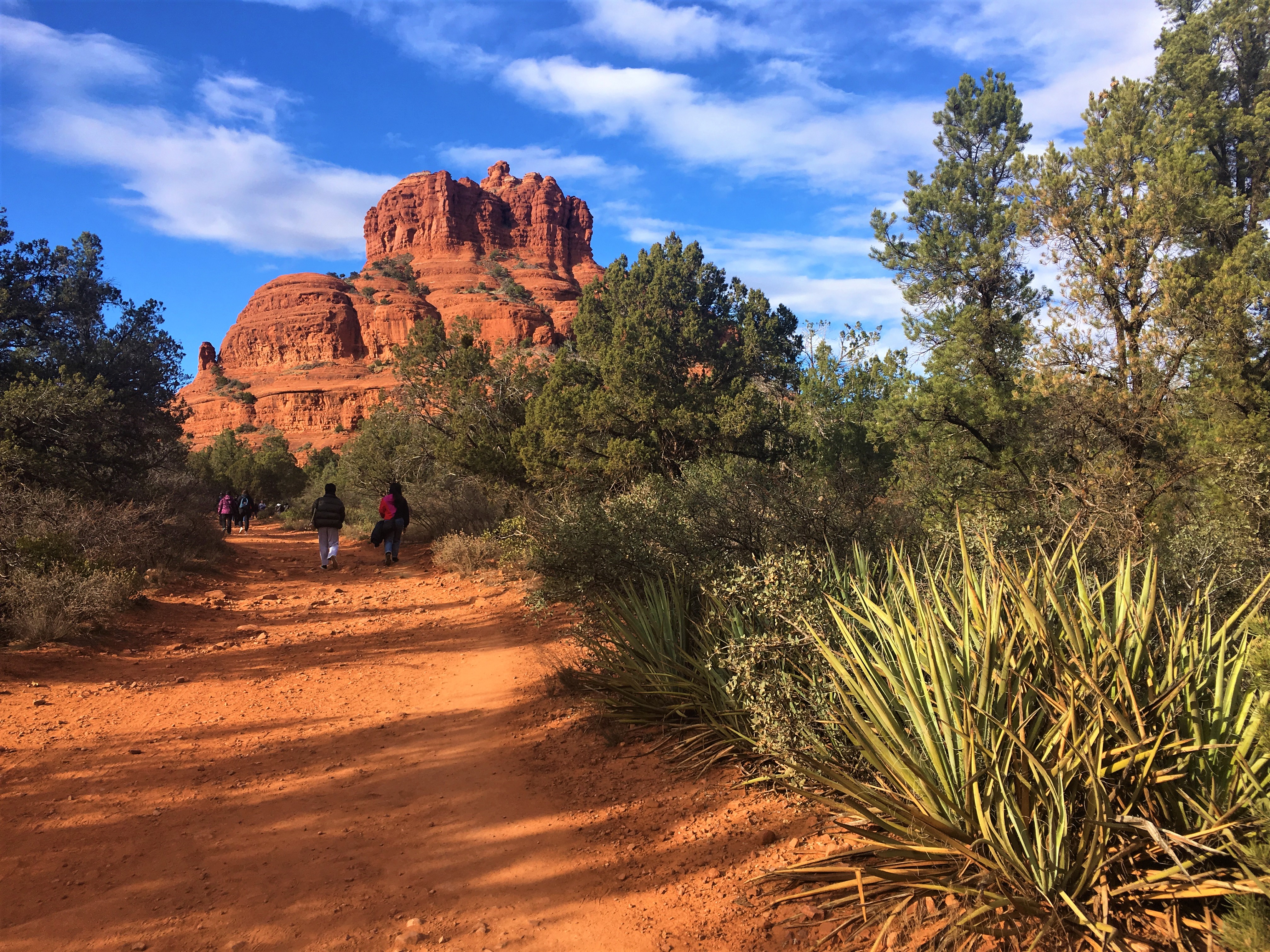 Did you know Sedona was once a beach? It’s kind of crazy to think about it especially when we all know of Sedona being famed for its red rocks situated here in Arizona and its dry atmosphere. These rocks were formed from millions of years ago where the layers of sandstone and limestone were left from an ocean’s past. But, the story of Bell Rock goes beyond its history, it’s also a place known to carry strong energy called a vortex.

Table of Contents show
1 About The Bell Rock Trail
2 The Spiritual Energetic, Cleansing “Vortex” in Sedona
3 The History of Bell Rock
4 Pin It!
4.1 Liked this post? Share this:
4.2 Like this:
4.3 Related

About The Bell Rock Trail

Back in December on Christmas Day, a visit from my siblings and cousin in Arizona had us intrigued to explore Bell Rock, one of Sedona’s known rock formations, with a few trails that intersect with each other. At the time in December, it was quite cold but still bearable weather to do the hike and the winter is usually short-lived here. The Bell Rock Trail is also one of the easiest hikes and walkways of the rest in Sedona.

The trail, also listed as Big Park to Bell Rock Pathway Loop on AllTrails, is a 4.0 miles loop type of trail with an elevation gain of 377 feet. It is definitely doable and the views are mystifying with its vivid red rocks seen on many angles and grassy fields that are scattered. Although the pathway is a bit rocky and with so many incoming hikers/visitors (this is probably one of the busiest hikes I’ve seen in all my 25+ hikes in Arizona), it will get a bit dusty. It is, however, the best way to see Bell Rock closer. You will also get to see the scenery of Oak Creek Canyon from a distance on the trail and Cathedral Rock is also one of the viewpoints that will peek through the corner.

But, what makes this hike so interesting? Well, one of my sisters looked this hike up and wanted to do it because she heard about Arizona having “vortexes”. And, as I mentioned before, this area used to be a tropical beach, which I will get to in a little bit. So, what exactly are vortexes? Prior to this, I had no idea, but I read a book about it for a short while in an awesome shop that sells crafted ceramic and glass trinkets and other souvenirs and it was interesting to learn about.

A vortex is a spiraling motion of air or liquid that is centered around a rotation such as a whirlpool or whirlwind. Think about when you were taking a bathtub and you had drained the bathtub water, you will see the water in a spinning motion being sucked into the drain. But, don’t get this twisted about seeing one in the form of physical forms through nature in Sedona, the vortexes that are claimed to be there are spiraling spiritual energy and Sedona is the right place for spiritual locations.

To be more specific, Sedona is considered to be sacred and powerful and these spiritual locations are where energy is most alive. Sedona’s red rocks are said to emanate energy that is helpful to healing, meditation, and to one’s self-journey. Many claims after visiting a vortex, they feel more inspired, relaxed, recharged, and energized. If you’ve ever felt lost with yourself a bit, confused, uninspired, unhealthy, and unstable, perhaps visiting one of Sedona’s vortex locations can help you. In fact, many yoga companies and guides offer vortex tours and you will see many of these people performing yoga or meditation on top of some of Sedona’s rock formations that claim to have a vortex such as the Bell Rock Vortex.

The History of Bell Rock

You’d never know by looking at this location that this landscape of Bell Rock was once a tropical beach oasis. It was a million years where the sea level rose and then it fell down many times, but when the water did rise, it created the layers of sandstone we see standing today. Those winds and rivers had carried sand and it formed sand dunes.

15 million years in, these exposed rocks underwent a period of faulting and volcanic activity and the constancy of wind and rain eroded them, creating these unearthly formations that put tourists and locals in awe.

Visiting the Hole-In-The-Rock, a Gift from the Prehistoric People of the Sonoran Desert, in Phoenix, Arizona

Is Hawaii Worth the Cost and the Visit?