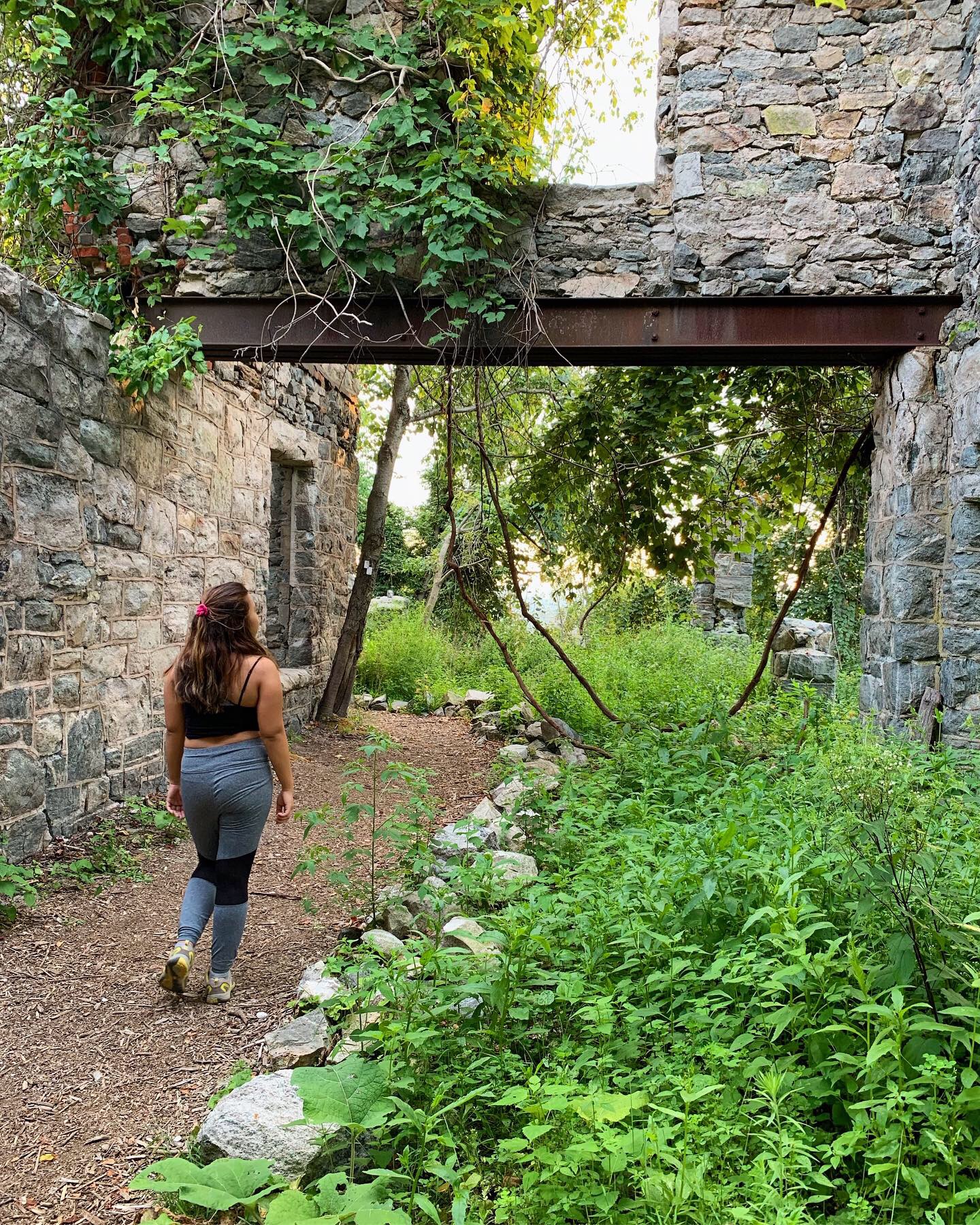 If you’re ever in New Jersey and believe that good hikes do not exist in this coastal, close to New York City state, you are wrong, my friend. In fact, this hike I did as part of the #52HikeChallenge I’m participating in is one of my favorite hikes so far that I’ve done in my state. Ramapo Mountain State Forest is a state forest located in between the Bergen and Passaic counties. So as far as the city where it is, it’s not quite identifiable but I know it’s very close to Oakland, New Jersey. Along this trail, the best thing we saw (and the star of this trail) is “castle” ruins called the Van Slyke Castle Ruins. Before we get into this, I wanted to note that I loved this trail, besides those castle ruins, because you will also see a nice lake and a New York City skyline hiding behind forested mountains across the top.

As a frequent hiker in Arizona, I do not see forested hikes there often so when I got back to my home state to visit, I was all for doing one… especially if there’s far more to it. The hike my friend Julio (on Instagram, he’s @esteban_julio95 and major credit to him for taking the majority of these pictures here!) and I completed is the Yellow Trail in Ramapo Mountain State Forest. It is 3.1 miles long, difficulty rated as moderate, with 498 ft as the elevation gain, and it is a loop type of hike.

The hike starts off with just a walk through the forest that begins to be on a road pathway. As you walk, you start to feel you’re going upwards a hill and remember to always look out for yellow markers posted on the trees to make sure you’re staying right on the trail. You’ll find residential homes located there too and you might spot a cool brick-stone building (maybe a water tower?) that appears abandoned but it’s by private properties, so be aware not to go further. It must be kind of cool to live in a mountain during the summer but I certainly would never.

As we trek further, we spot a gorgeous lake, which at the time of the day, the sky reflected right on it. It’s quite huge and we spotted people fishing right by it too, so we know it’s also good for that. My friend and I did do the wrong way to hike at this point since I lost service on my phone and the blue dot tick marker on my AllTrails app was not moving along my downloaded map for some reason. We found out it’s actually on the other side of the lake (the right side) and we weren’t too far out to walk there, so thankfully, we got right on track. It’s always easy to go in the wrong direction when it’s a split route.

We then found a very cute protected area of all types of flowers by this huge boulder and a cute cottage-looking home located on top of a hill. It was lovely, since you know I love seeing colorful flowers.

As we keep walking along, the pathway does start to get rockier and we are back to being surrounded by a forest. My friend saw a very tiny red snake (I think it’s called a red-bellied snake) right before my feet and it was interesting to see since we have never seen that before. The creepy bugs were the most annoying part of this hike, so remember to ALWAYS wear bug spray in these Northeast hikes. Also, to avoid those ticks that are an epidemic out there. We also saw floating bugs where we had to outrun them (while holding hands doing it) because we were so scared of being attacked by them haha, but not too long you get to spot the “castle” ruins.

There are so many little separate portions of these castle ruins that we explored. Behind one of them are an opening of an aerial view of the forest AND a lovely distant view of the New York City skyline behind shadowed forested mountains! Especially during this time of day and the clear weather, it’s more visible to see.

History of the castle ruins

The Van Slyke Castle Ruins, as they’re called, was built in the early 1900s and was previously called Foxcroft. According to Atlas Obscura, this used to be a mansion that belonged to William Porter and his wife Ruth as their vacation home and it got burned down by vandals. After Ruth lost her husband due to a car accident, she married an attorney named Warren Van Slyke, where the name of that mansion was later changed. Other people started owning it after them and it was then abandoned by a woman named Suzanne S. Christie. After those vandals caused mayhem to the place, it turned to look like bygone ruins that are now explorable, like what we did here.

A little bit past one of the ruins, we went forward ahead. When I get curious, I will take a way that I believe might lead to a good view — although that might sound risky. And that’s right, you can see the lake we were just hiking around from this top angle.

3 Interesting Museums Worth Checking Out in Washington DC

Haunted Houses To Visit This Halloween

The Happiest Place on Earth: Is It Really Happy?