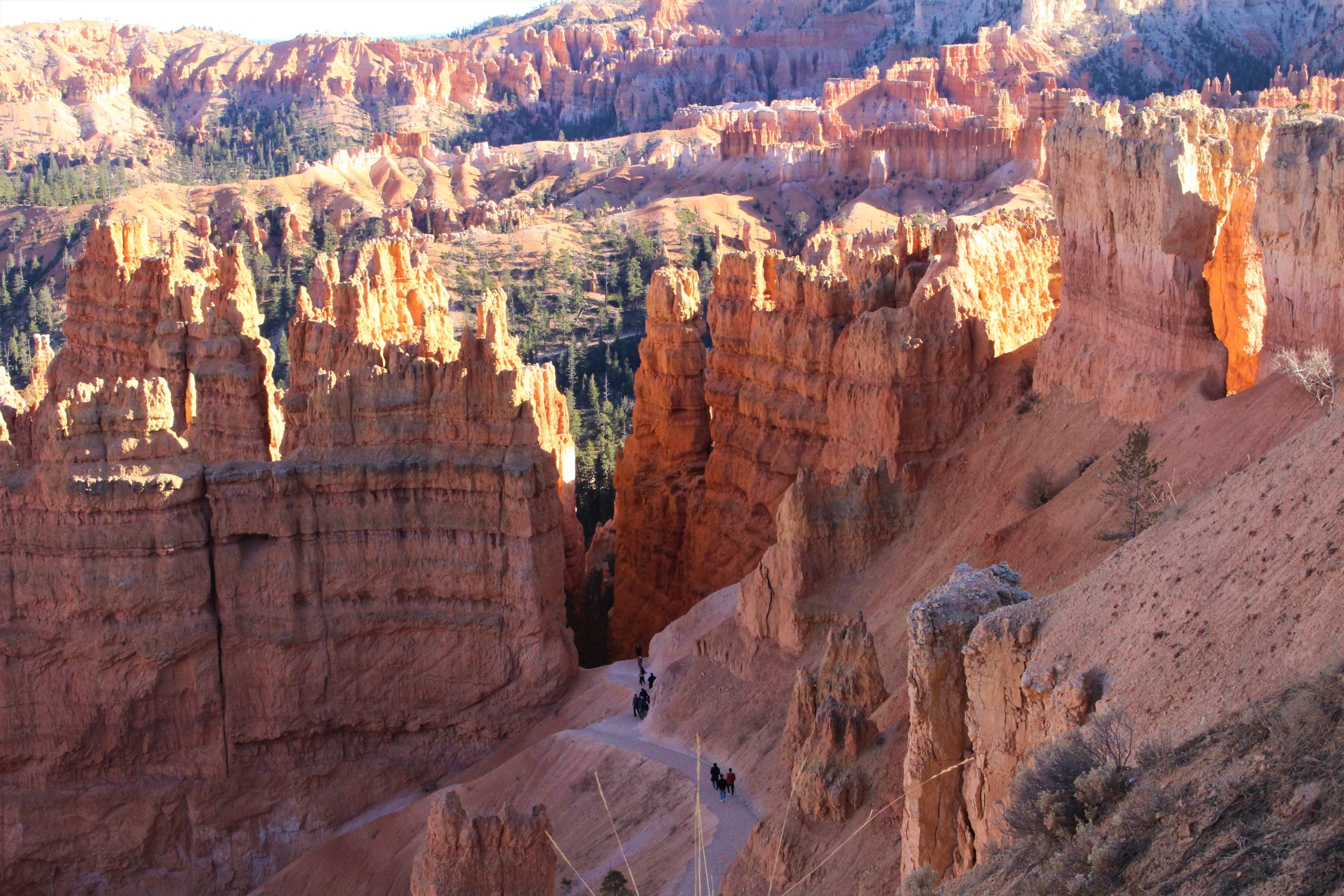 *This blog post is also a continuation of my other blog post “How To Visit Zion National Park In One Day”.

Table of Contents show
1 Some important tips before attempting to do both national parks in a day
2 Exploring Bryce Canyon National Park
2.1 Some history and information on the park
2.2 Important info before visiting
2.3 Stop at a viewpoint in Bryce Canyon (or a few).
2.4 Do a hike like the Navajo Loop Trail (with a list of other suggestions.)
2.5 OVERVIEWELEVATION: 4,500 FT TO 11,000 FTAREA: 35,835 ACRESDECLARED AS NATIONAL PARK: 1928STATE(S): UTAHCLOSEST CITY/CITY LOCATION: BRYCE CANYON CITY
3 Find a place to stay by Bryce Canyon National Park!
4 Pin it!
4.1 Liked this post? Share this:
4.2 Like this:
4.3 Related

Set a time for your exploration of each park at a maximum of 3 hours. This is good enough if you’re trying to crunch both visits in a day, but it’s always recommended that you spend a good 2-3 days and more if you want to explore each park thoroughly.

Some history and information on the park

Bryce Canyon National Park is majestic. When I first came across seeing this national park on Instagram, I just couldn’t believe such a park with all these formations existed! It blew my mind as much as it did in person. Its orange-colored rock formations that are sharply shaped make the park distinctive from a lot of other national parks. Eccentric. Peculiar. Out of this world.

These unique formations are called “hoodoos”, which are tall thin rocks with its bottom consisting of soft rock that was covered by a harder-but-less-eroded rock, undergoing a lot of weathering processes. They’re usually found in dry and deserted environments. Kind of similar to a pinnacle (also known as a spire or tower), hoodoos differs from them from their shape where they almost resemble totem poles in comparison to a thick bottom that tapers to the ground that pinnacles have.

You’ll come to find out getting to Bryce Canyon National Park is a remote area. It leads to long highways that pass by Dixie National Forest with the first sign of hoodoos, but you won’t see much of those and you’ll be driving through plains until you enter the park. The drive through Bryce reminds me a lot like the drive-through of the Grand Canyon South Rim where its surrounded by Ponderosa pine trees.

Bryce Canyon may be named as a “canyon”, but it really consists of amphitheaters of natural rocks, so what you’ll view is the series of rugged landscapes. Before it became a national park on February 25, 1928, the park was named after Ebenezer Bryce, a Mormon rancher who saw the badlands behind his 1870s ranch, and before the Mormon pioneers settled there, Native Americans once inhabited the area. Native Americans had also believed in a legend that the hoodoo rocks are “Legend People”, people where the god Coyote turned them into rocks. Bryce Canyon’s landscape has been around for about more than 65 million years.

The entrance fee for a vehicle to Bryce Canyon National Park is $35, which is valid for 7 days. A motorcycle is $30 and an individual with no car is $20, all valid for 7 days too. Of course, you can save more with an annual national park service pass and I recommend that you get one if you plan to travel to as many national parks as you can in a year as it will reduce your costs for entrance fees every time until its expiration date.

I would also check on the hours of the day of the week when the visitor center for Bryce Canyon National Park is open until. It varies during holidays though. Here’s a useful schedule from the National Park Service site:

Stop at a viewpoint in Bryce Canyon (or a few).

Seeing the grand scenery of Bryce Canyon is something you must not miss when you’re visiting. There are a few viewpoints you can stop by to see the amphitheater and each one gives a different perspective. You can get a glance at Bryce Canyon from at any time of the day from sunrise to sunset (with viewpoints specifically named after these), but did you also know that Bryce has one of the darkest skies in the country? This means that Bryce is perfect for astrophotography and stargazing because the area is far from the pollution that clouds up in civilization. You can see thousands of stars at night even on a moonless one! You can go to any viewpoint for any night escape.

Here are viewpoints you can stop by at Bryce:

The best way to get the most of a national park is the hikes. One hike that took my breath away (literally, it got my heart racing due to the higher elevation) is the Navajo Loop trail, a hike that many claims to be their favorite as well. It also got me reminding a bit of a trail in the Grand Canyon (although I haven’t hiked it yet), but I also read from other sources that some points resemble it.

The Navajo Loop trail actually begins at the Sunset Point and it can also be combined with the Queen’s Garden trail (if you want a longer hike). What makes this hike phenomenal are the views that you can take in like the amphitheater of Sunset Point, a close look at the hoodoos, and a scenic view enclosed the canyon walls with some Ponderosa pines to look for.

It does have steep switchbacks so you’d have to be very careful and take your time getting down especially by the starting point since the trail does lack guardrails in some parts. It’s a lot harder and tiring to hike up than down because of how steep it is to climb up, but it’s scarier to hike down. The hike is 1.4 miles long with an elevation gain of 459 ft and it is a loop type of route. Since you only have limited time to visit the park, doing the Navajo Loop Trail is perfect to do and it can take about 1 hour to get done.

Other easy and quicker hikes you can do for the meanwhile of visiting the park in a limited time:

Find a place to stay by Bryce Canyon National Park!