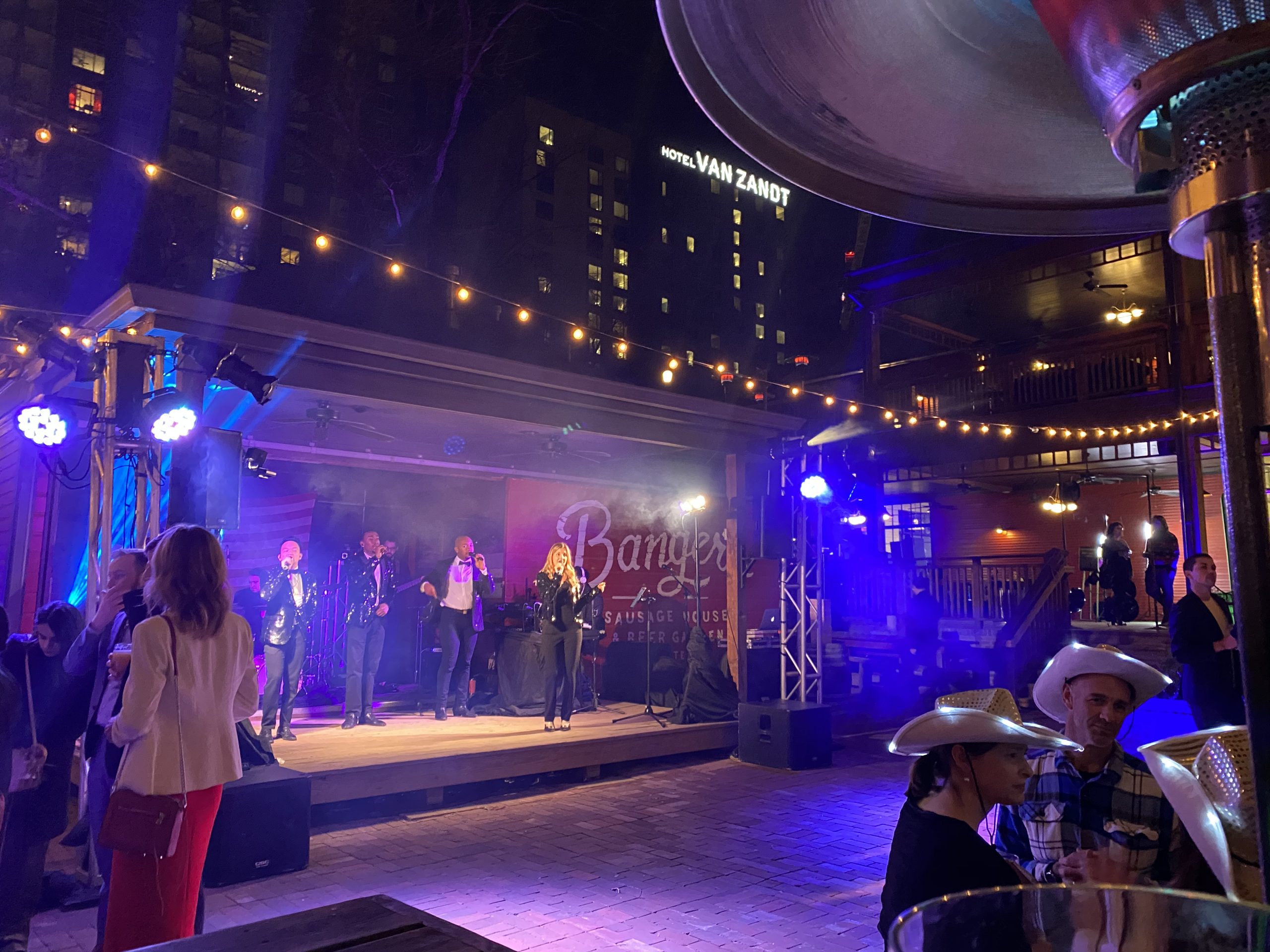 As the holidays are approaching, I took the opportunity to fly out to Austin, Texas for a few days and one of those reasons being… to be my best friend’s plus one at his company’s holiday party. Having never been to Texas before this trip, the experience to come out and to feel out the holidays over here was joyful! We celebrated the holidays at Banger’s, a place known in Austin.

For those who are unaware, like I was prior coming, Austin, Texas is called the “Live Music Capital of the World” (it’s known for all the hundreds of live music venues to find in the city), known for their BBQ, restaurants, and bars with so many lights displayed with them, and where I went for this holiday company party was the perfect representation of all of that.

My best friend, Karan, who I grew up with for 10 years since we were 14 years old in high school, moved to Austin for work. His company, GoDaddy, held an event for the company in the city to attend the party. It took place in Banger’s Sausage House and Beer Garden, one of Austin’s recognized beer gardens and known for its lineup of housemade sausages.

After my friend’s co-workers met up with us at his place, we took an Uber ride (free codes given out by the company) over there. I was excited to attend a holiday party since I don’t have one for my own to attend (and this is the second time during the holidays I got to!) and I haven’t gotten dressed up all fancy schmancy in so long, so this excited me. Heels? Check. Red lipstick? Check. Space cowboy attire? No, even though that was part of the holiday party’s dress code, but I chose a cocktail dress instead.

Banger’s Sausage House and Beer Garden is located on Rainey Street Historic District, the same street that features a section with a load of food trucks (that is right across it too and makes the perfect place to go to if you’re even MORE hungry after the event). Did I mention Austin is also known for its food trucks?

Banger’s is right by many other restaurants, hotels, and bars that all light up at night. The venue looks like a modern farmhouse (it’s colored red too) and has many lights lined up and hung. It has an outdoor beer garden and there are some seatings to find inside as well. There are many options to be sitting at and for an event that got so crowded, this was necessary.

There’s a stage that was set in the center between two of the buildings, where the outdoor tables were placed, making it the perfect place to watch the live musical performances and eat at the same time. Due to how cold it gets in Texas at night, there were a lot of heaters around the place that helped you stay warm to thoroughly enjoy the event; the place was well prepared in their planning.

The food and drinks

Before anything, our empty stomachs were longing for the food we saw as we hopped by the open buffet. The food was in big pots and there were options of collard greens, pork and beans, mac and cheese, and can’t forget the BBQ meats of pork and turkey with many choices of BBQ sauces.

All of these were great! My favorite side was the mac and cheese, it was so creamy and milky. There were also a lot of food samplers being handed out at random places by servers and some of what I picked up was potatoes with cheese and bacon and some unique pizza bite. After the food from the open buffet, I ate two different kinds of sausages on bread: the bratwurst and another one I cannot identify but it was a bit spicier with cheese. They were good and cooked just right.

For drinks, the company gave everyone including the guests two free drink tickets. There were so many options to choose from, with so many bars to go to! There are over 200+ beers on tap. The bars in where the food is being served and the ones outside offer different kinds of beers to some ciders and then some wine (I got delicious cider and a rosé). There’s a basement that had a long line alllll through the night and that had many other kinds of liquor you could be looking for. I never got to go to the basement due to the volume of people there and those trying to get in.

For dessert, a server was openly handing out strawberry shortcake on a biscuit. It was ridiculously delicious! I’m not sure what other desserts there were, but I bet there were just as good options too.

The live music (and DJ set)

The band that was performing that night did such an exceptional job in covering hit songs and making them fun along with smooth dance moves. Although, in the beginning, hardly anyone danced, but with my confident and outgoing personality, I decided to be one of those who were confident to dance even when no one was. Soon enough, others started joining along. I loved seeing everyone dance and rock their lit-up cowboy hats.

Towards the end, they took a break (they performed for hours straight and that is always impressive – got to give more credit than what artists are used to), and a DJ played some hip-hop music that many people were also dancing along with. Then, the band got back on and threw even more awesome songs at the crowd.

It was fun dancing with my friend’s co-workers even when I knew I would never see them again and with strangers! Got to make Austin worth the travels by dancing and mingling along, right?!

See what other things you can do around Austin, TX

Is Hawaii Worth the Cost and the Visit?

A Guide to the Lower Antelope Canyon in Arizona