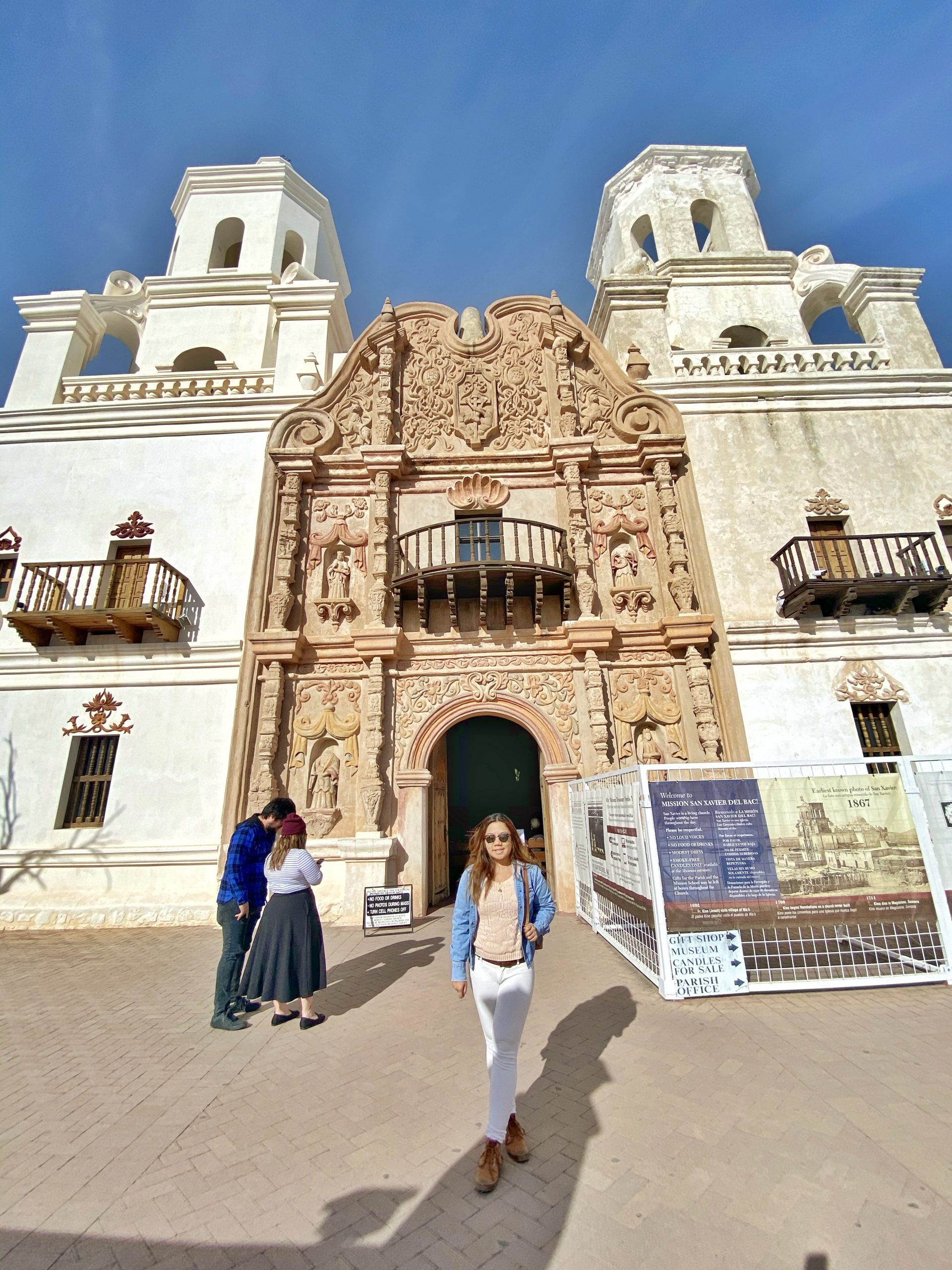 Mission San Xavier del Bac is a recognized symbol in Arizona and it is located in the city of Tucson. Its architecture possesses a historical beauty of a mission that stood among many centuries and it’s also the best example to see a Spanish Catholic mission in the country. Its construction began in 1783 and it was then completed in 1797, making it the oldest intact church of the state. Also known as San Xavier Mission, the mission survived tragedies time and time again, but today, it has become a symbolized strength for its visitors. According to SanXavierMission.org, about 200,000 visitors each year (and they come from anywhere in the world) come to see this.

The church is beautiful from the outside, but the inside is impressive with intricate details. Mission San Xavier’s exterior is made of white stucco and inspired by Moorish architecture that is used by Islamic architecture in North Africa and parts of Spain and Portugal. The massive doors are made of mesquite wood. The carving of the middle exterior of the building is just an artist’s dream as the details are splendid.

This architecture design was designed by Ignacio Gaona, who was hired by two Franciscan fathers named Juan Bautista Velderrain and Juan Bautista Llorenz after borrowing 7,000 pesos from a Sonoran rancher. Gaona led a workforce to help create the church. The church’s design takes after a classic cruciform or also known to be “cross-shaped” if you look at it from an aerial perspective.

Inside the church, you will see colorful patterns and colors that take place on the walls. There are statues from way back that are displayed, mainly in the front of the altar. There are also several murals to see in every angle of the church inside from each side of the walls to the dome.

I’ve always known for myself to have a strong spiritual connection that I inherited from both my parents. You can read my story the time I had an eerie feeling while exploring Lower Antelope Canyon in Arizona. While I was touring the church inside, I was also praying, as a devout Catholic. There’s a statue lying down in between the rows of candles and he is covered with a purple blanket. He is sometimes referred to as the “San Xavier Mummy”, but no, he is not a mummy, but rather a wooden statue. There are pictures of people who passed away pinned onto the blanket so that’s what intrigued me more to see it up close.

I put my hand onto the blanket and this may sound weird (especially if you’re not into spiritual phenomena like that), but I felt a strong urge of peace come over me. My anxiety just flew off of me. My heart rate wasn’t racing as much anymore and I felt a deep feeling of ease inside my chest. The physical symptoms I was experiencing were odd, but it didn’t feel like negative energy, but more so, a positive one. I couldn’t keep my hands off the statue because it just felt so good to feel this way.

I told my aunt the story and she claimed the same happened to her many years ago with a different statue and she said that maybe “a miracle will come.” I am not sure what to think of it. But, according to the Weird Arizona book, people leave those photos and rub his body to relieve their afflictions. Let’s hope that is what I’ll be feeling, especially in the new year of 2020.

The statue is the patron saint of the mission, St. Francis Xavier. It’s a crucified Christ statue and it was originally from Tumacacori National Historical Park, which was then Tumacacori Mission, located in Santa Cruz County of Arizona.

Did you know that the church you see in San Xavier today is not the original church? Yes, it was built back in the late 1700s, but the original church was about from 1700-1770. It was always vulnerable towards the Apaches and it was then finally destroyed by around 1770 and prior before in 1763, the church had already been abandoned due to the Apache attacks that were taking place.

Not only did San Xavier suffer the loss of the original construction, but it went through other events of losses. In 1887, an earthquake came and damaged parts of the church, including knocking down the mortuary wall, whereas a few years before this, the church was abandoned again and projects took place to fix the church.

On August 27, 1964, the first fatal tornado of Arizona occurred. The tornado had hit the church and also an Indian village that destroyed four homes, according to Tucson.com.

After these tragic events, the church still came out to what we see now, regardless of the retouches that are often done to the church, yet it does a great job preserving it from the 18th century.

What else to see in San Xavier

There’s another area to see that is right by Mission San Xavier and it is easy to access with a climb up a hill, this is called Grotto Hill. You can overlook the whole church from above as you go from there. There is a grotto around the corner and by the shrine, it is a quiet place you should refer to do some reflection and praying upon. You can also find a cross on the very top of this hill. As you look all around the hill, views of the Tucson Mountains, Catalina Mountains, and the Rincon Mountains are highly visible.

San Xavier has courtyards that exhibit cacti and other desert plants from each side of the church, other quiet praying rooms, and a gift store filled with many trinkets and souvenirs, including jewelry, magnets, stuffed animals, and even Arizona state-themed souvenirs. My family and I bought a candle that has a picture of San Xavier slapped on to gift to my aunt and I bought a small handmade rose-scented soap.

A day in Tucson

Here’s a video I posted on YouTube to see a short video tour of Mission San Xavier and what I did at downtown Tucson (highly recommend visiting after checking out the church!).

7 Cool Things To Do in Avalon, Catalina Island