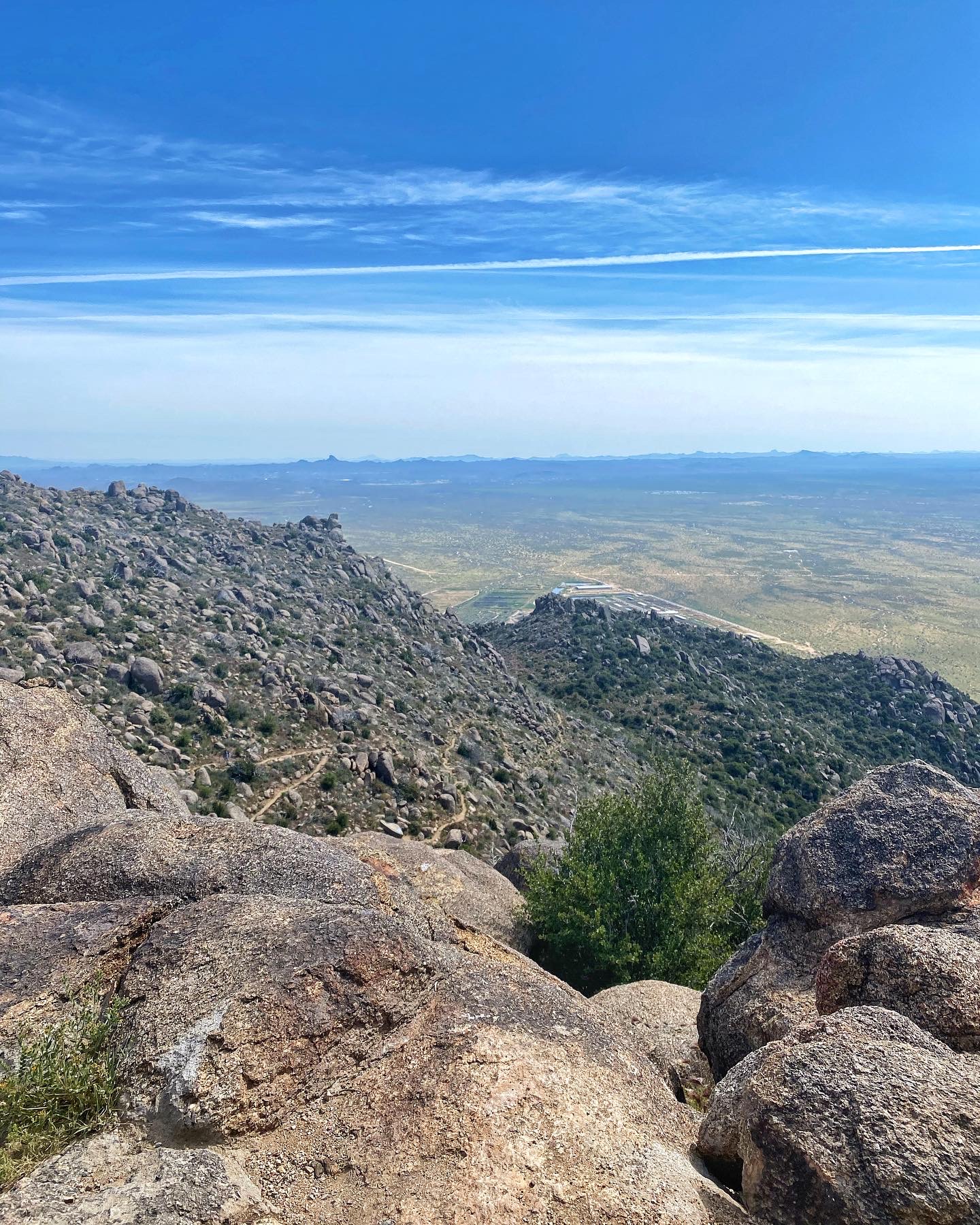 On June 30, 2013, a tragedy occurred here in Yarnell, Arizona. Nineteen men perished while trying to fight a wilderness fire. These men were part of a wildland firefighting team called The Hotshots. This tragedy also referred to as the Yarnell Hill Fire, is one of the deadliest US wildfires that occurred. Where these men took those steps on that tragic day, you can hike the same way they did with this hiking trail within the Granite Mountain Hotshots Memorial State Park, located 90 miles northwest of Phoenix. Going through this trail can be an emotional experience because you will connect with the story by taking those steps and then passing by each aspect of the memorial.

Table of Contents show
1 Watch me hike this on YouTube!
2 About the hike
3 Hiking Granite Mountain Hotshots Memorial State Park Trail
3.1 More about the story of the Hotshots Crew
3.2 More on the hike
3.3 Getting to the Fatality Site
4 Pin it!
4.1 Liked this post? Share this:
4.2 Like this:
4.3 Related

To drive to this trail, you will be driving up a mountain with some winding roads. You’ll get up higher in elevation and then the destination will take you to see a parking lot by a set of stairs and rails. That’s where Granite Mountain Hotshots Memorial State Park hike will be located at. When I tried to park in the parking lot, the ranger told me not to park directly there because it’s only for 10 minutes parking, so it’s best to park right by the side of the mountain and walk over to the trailhead.

You also have an option to take a shuttle with recommended donations (cash only!).

As you hike on, you will notice the trail already starts to ascend. Since the hike is already stationed on the mountain, you will be at 5,000+ ft altitude. I need to warn this hike is NOT for beginners and more so for experienced hikers. Good hiking shoes, having plenty of water (at least half a liter of water per hour – for high heat, as it can get hot here in Arizona, a liter of water or more per hour is good), and bringing hiking poles are recommended.

The trail pathways will be narrow and very, very steep for most of the 7-mile hike and you will feel yourself close to the edge a lot. It’s such a beautiful hike though and you’ll see views no matter where you turn. For me, I started experiencing vertigo a few times doing this trail with a constant fear of heights, and I try to not focus from the heights, but it’s quite avoidable with all the open spaces outside the hillside trails throughout.

More about the story of the Hotshots Crew

Throughout the trail, you will come across memorial plaques where you can learn about each man from the Hotshots Crew. They are spread out from each other at every 600 feet you get by. These plaques are so inspiring and really touches you as you learn about each young man.

I noticed what they all had in common was their love for the outdoors. These men were all mostly just starting their lives. Most of them were in their 20’s (around my age). Some had children, some were in college, some got out of the military, some had hobbies they were devoted to, and all of them love the outdoors. They were all trying to live their life to the fullest and most were just beginning their lives and they all had a passion to help.

Out of all the men in the Hotshots Crew, there was a lone survivor, Brendan McDonough, who went on to author a book on this story. There were 20 of them in all in the crew and the 19 of them lost the battle to the wildfire, but Brendan continues to speak about his story as a public speaker. He is also an advocate for mental health and works with numerous nonprofit organizations for firefighters, veterans, police officers, and those in emergency medical services.

On that day of June 30, the men were assigned to fight a wildfire right by here in the memorial state park. Brendan was a lookout and wasn’t with his 19 brothers. 19 of them were overtaken by the fire in minutes. The place was ablaze with 2,000 degrees heat. According to this article on Azcentral.com, the crew was planning to “use the ranch as a jumping-off point to save structures in Yarnell. But as the crew descended from a burned-black safety zone into the canyon, their view of the fire disappeared.” That’s where the flames had came towards them.

There were strong winds that day that contributed to the spread but lightning that sparked over Yarnell is what caused the fire to start with the combination of the strong winds and intense heat.

More on the hike

You’ll find some plaques spread through the trail to explain more about the story and how the events unraveled. You can also find benches placed in corners of the hike, which makes as great resting stops through the trail and gives you a place to reflect.

As I continue to hike, I can feel the heat set in. I’m sweating, but I still feel lucky for the cool breeze to come through in-and-out. This hike makes you rethink and put you to the perspective on the sacrifices these men took. They hiked in extreme heat conditions, carrying at least 40-50 pounds of equipment including chainsaws through these narrow trails. I really do feel thankful for heroic brothers and sisters who take up jobs that put them on the line for duty to save lives. It’s a tough job to be a firefighter and I can say, it’s for only the brave (just like the name of the movie dedicated to the Hotshots – Only The Brave).

The views of the stony hills and dry scrub landscape are visible throughout. Granite boulders are abundant (hence the name) and become more so halfway through the trail.

Getting to the Fatality Site

By the time you reach the area with a shaded observation deck with a green roof, you will also see The Tribute Wall, a wall decorated with many emblems and hats from firefighters, police departments, veterans, etc. Upon below and directly straight from this area, you can spot a circle of meshed containers called gabions (which encases rocks inside it and then has items left by people and some personal items of these men). There are 19 of them there, each dedicated to each man who passed that time. There are 19 crosses inside the circle.

Below there is also the Fatality Site, the area where these men were found and where it took their lives. As you’re looking down there, you may start to believe that you’re almost down to the memorial spot/Fatality Site, but it’s still half a mile down, which can almost feel like it’s still a long way to hike down of 400 feet. You’re exposed to yet again more narrow trails by the edge and have to make switchbacks that can be tiring to climb back up (as I felt).

When you reach down to the spot, this is where you can pay your respects and pray for these men. I am sensitive with high spiritual energy and can feel when something tragic has occurred in an area (even sometimes before I know about an event occurring there) and I felt that energy through my heavy chest. I felt spiritually connected to the losses and can only say Amen and God Bless these men and their families.

Also, you will hike back the same way you came. Be careful as it feels steeper to getting back down and take your time. Hiking poles are a wonderful option to tackle the steepness.

5 Fun Things to Do in Marco Island, Florida

A Guide to Pearl Harbor