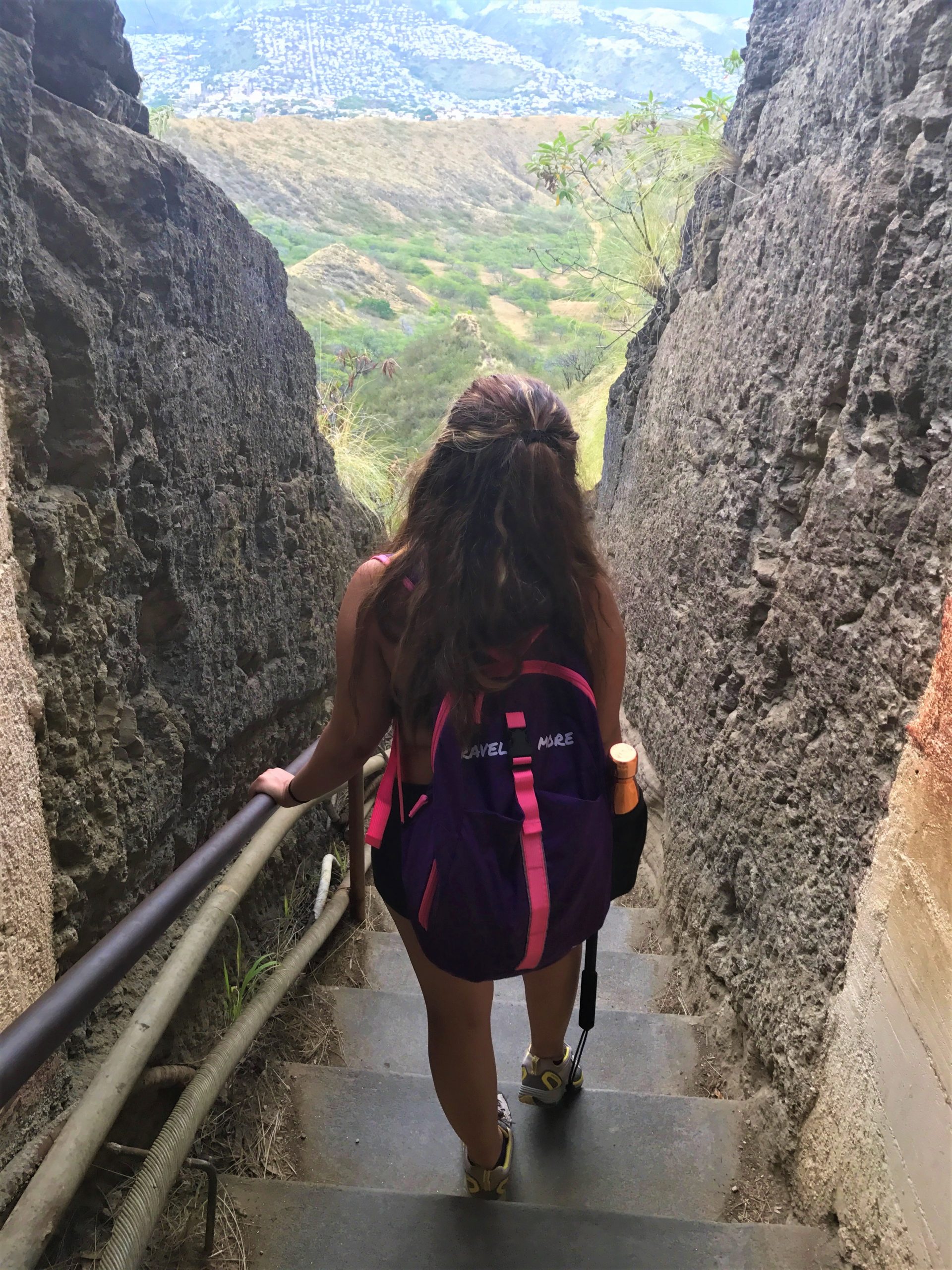 This is probably known as one of the most popular trails in the city of Honolulu, Hawaii, and the island of Oahu but upon doing the trail, it’s hard not to see why it isn’t. The views you get from up here are beautiful, overlooking the city and the turquoise waters from a 360-degree angle view. Diamond Head Crater used to be part of a volcano chain that formed around 300,000 years ago (Oahu is about 3 million years old) and it is also called Lēʻahi. The crater was made of ash and other particles that formed from an eruption.

Interestingly, the volcano that Diamond Head Crater was once and its eruptions caused some coral reefs to be covered with over 100 feet above sea level. Diamond Head Crater had a military history, which is also prominent around other beaches of the island with pillboxes and bunkers to be found. Fort Ruger was built around here for the purpose to defend the harbor.

Stats of the hike

This hike is highly trafficked and according to many reviews, it’s crowded as it is through sunrise to the day. Be cautious of other hikers who are taking their time for the hike. It may be a bit hard for beginners with the steep parts but certainly easier for more experienced hikers.

When you arrive here, you might feel a bit confused just as my friends and I were back in 2017 when I hiked this. There’s a tunnel you have to enter through first. This tunnel is called the Kapahulu Tunnel and it is the entrance tunnel that was built in 1908 for military purposes.

After passing by that, you will be on the parking lot and then by the amenities, you’ll start walking through a paved path and then transitions in an unpaved trail with some rails and then you’ll start ascending rockier path where you can spot a lookout.

You will have to climb through steep steps of a staircase that leads to a dark tunnel that is somewhat lit on the bottom. You may need to duck your head if you’re tall!

As you come out of the tunnel, you will climb onto a steeper set of stairs. As you arrive on top, you will end up in yet another tunnel, but make sure to turn around because the views from making it into this other tunnel are beautiful and you can overlook the city! It’s at 703 ft high.

Inside this shorter tunnel, you can see the remains of the army fortification which is adjacent to a spiral staircase that will lead you up to an army lookout that overlooks the beautiful blue sea. You may even get a glimpse of Diamond Head Lighthouse, which is a cool thing that sticks out by the coastline!

You need to climb out of the lookout by watching your head under a little ladder and then you emerge out of a view on the edge where you can see the whole city of Waikiki.

There is then the final staircase to the very top lookout of the Diamond Head Crater that gives you 360-views of green ridges, the sea, and Waikiki.

What to watch out for on this trail

The weather in Hawaii can be very hot and humid with little to no wind, especially during the summer months. It’s important to stay hydrated as much as possible (about 1 liter or 32 ounces every 2 hours for a hike).

Some people will hike this trail with just sandals and flip-flops, but for obvious safety reasons, you should consider wearing some hiking or sports shoes.

The trail is not pet or dog friendly. There will be a lot of people on this trail, so take precautions when you are hiking back as the paths can be narrow and easily occupied and make space for runners (yep, people do run this trail and do a dang good job doing it!).

Watch me hike it!

Best Things to Do in New York City for The Holidays