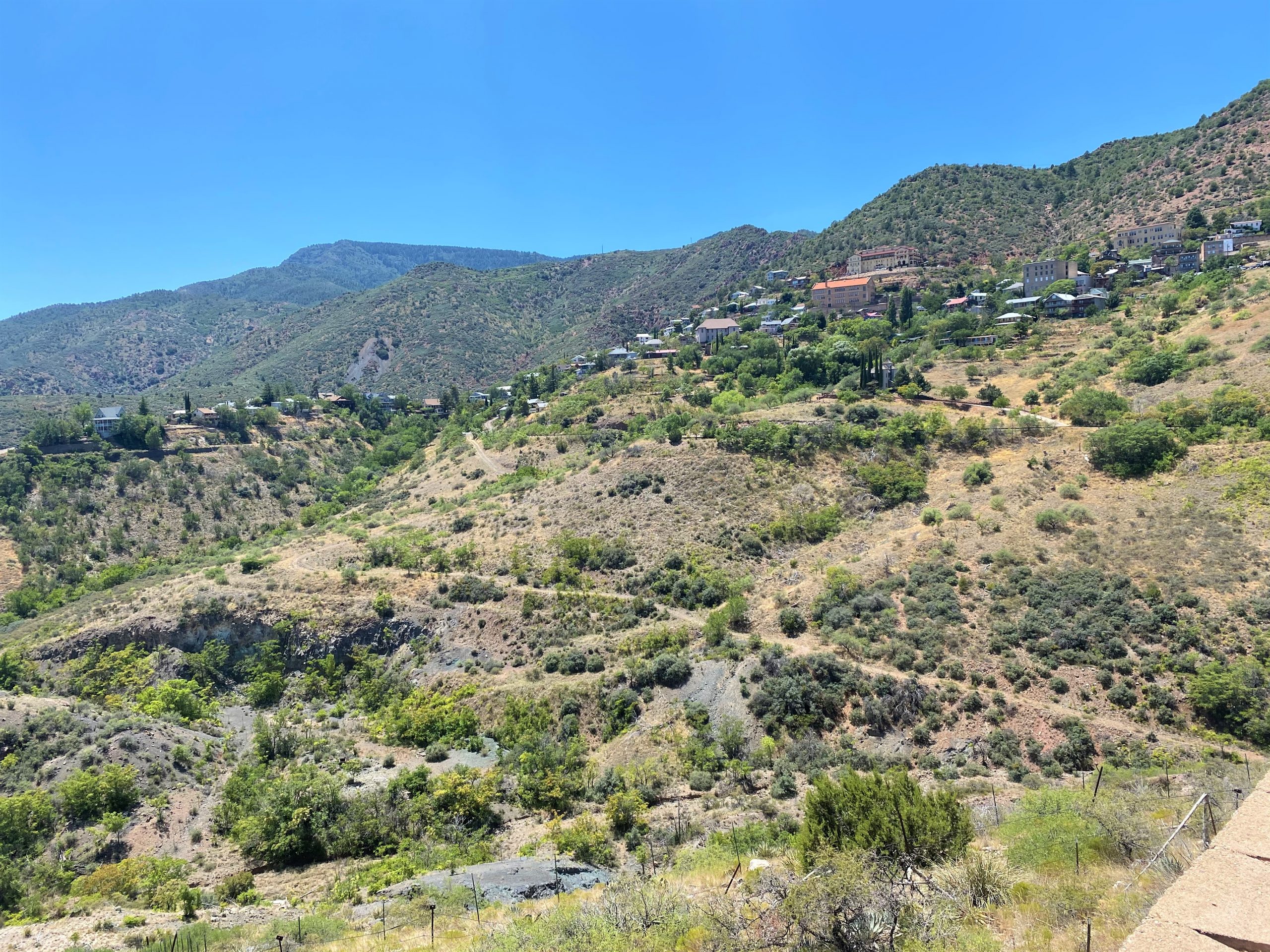 You’ve probably heard already that Arizona has plenty of ghost towns to explore and towns known for its “wild west” settings. Jerome is one of the more well-known ones, one of the coolest, and one of the largest ghost towns. Founded in 1876, this city could be easy to spot from afar as you’re driving there.

This elevated historic city is an active ghost town (and as I mentioned before, also the largest in the nation) located atop of the Black Hills, a mountain range, and it once had a history known for its copper mining. And at one point, Jerome produced a lot of copper, gold, and silver.

If you’ve never seen a ghost town or unsure by this scary-sounding term (I mean… why would someone even want to step in town where it’s referenced as “ghost”?!), a ghost town is a deserted or abandoned city with some buildings and infrastructure still remaining. The towns have shaped into these conditions due to economic difficulties or because of a natural or human-caused disaster. In the case of Jerome and some other ghost towns, these cities have more likely been preserved and also planned to be created as tourist attractions.

Another thing about Jerome is that it is known for having a number of paranormal activities reported among some of its places and you can find the most haunted places in the state of Arizona here. If you’re into those things or need a scare, you can definitely experience it in this city.

Going into exploring Jerome, I have to mention that Jerome consists of tourist attractions that make up the whole city a tourist attraction. There really are some awesome places worth checking into if you find yourself visiting. Below is a list of places I compiled (and some I have visited firsthand) so you can look into building your own itinerary.

Watch me explore the city:

Check out all the specialty stores that are lined up along Main Street. Also, pick up some goods! Some stores to check out are Spook Hall (They hold different types of events; I came here once for a flea market they hosted and they accepted donations for good causes!), Pura Vida Gallery, Miner’s Pick Rock Shop, and here’s a list of more (with where to find them and how to contact them).

We ate here in Bobby D’s Barbecue! They have delicious BBQ entrees including ribs, pork, brisket, sausage & chicken. Their chicken wings are also bomb! Also, it offers nice outdoor seatings on their patio and a nice bar.

I had OJ’s Copper Country Fudge’s birthday cake ice cream (SO good). This dessert place offers a variety of fudges (for what they’re known for), ice cream, shakes, shaved ice, etc. and even iced tea!

Located on Hill Street, there’s always a wait here in The Haunted Hamburger, especially during busy weekends. Haven’t gotten the chance to eat here yet because of that but it offers amazing views on the top of the hills. It’s known to be haunted as reportings of ghost activities have been reported (hence its name) and it’s especially known for its burgers. (They have more on their menu if that’s not your thing!) Their wait is considered as a “first come, first serve” instead of holding reservations.

This historic park has a museum that used to be a mansion, which is still referred to as the Douglas Mansion, named after James S. Douglas who purchased and developed Little Daisy Mine and he built the mansion on top of it by 1916. It features a lot of history on the city of Jerome, cool artifacts, and historic displays to tour around. There’s a nice overlook right outside of the Douglas Mansion and I recommend that to take wonderful scenic photos of the city.

This is not a park but really a place to stop by to admire the real-life mine. You can view it from a parking lot and also I recommend walking alongside the highway on the sidewalks to admire the views below these mountains. Stunning! United Verde used to be the largest producer of copper in the Arizona Territory.

We were too late to go visit this attraction at the time but I checked out the gift shop and it has so much to offer. Highly recommend their Prickly Pear Kettle Candy (it’s too tasty!) and this attraction has an old mine and a collection of old autos & trucks.

This attraction features a jail that once slid down the mountain by 225 feet down into one of the town’s main streets. This is due to dynamite explosions from copper miners around the 1930s.

Known to be one of Arizona’s most haunted places, Jerome Grand Hotel is almost like a real-life “The Shining” experience in the state. It overlooks the Verde Valley and it is known as one of Jerome’s only full-service hotel with a restaurant, Wi-Fi, satellite TV, and a 24-hour front desk, according to their website.

This hotel used to be featured in a few paranormal TV shows and documentaries and it attracts paranormal investigators and psychics. So, what makes this place haunted? This hotel used to be a hospital from 1927 to 1950 and then became reopened as the hotel you see now. Many people died from that hospital as well as other haunting stories that associate with the hotel. If you’re brave enough, try to spend a night in Jerome Grand Hotel, especially Room 32.

*Book a stay if you scroll all the way down to this post!

The Connor Hotel is a historic hotel from around 1898 and it is one of the two major hotels, next to Jerome Grand Hotel. It is decked with comfort and modern conveniences and as some reviewers, on Tripadvisor, say that it is like being in a “living Victorian house museum”. This hotel is also rumored to be haunted. The hotel also has a cocktail bar called The Spirit Room.

*Book a stay if you scroll all the way down to this post!

This is an easy 1.4-mile hike (and with an elevation gain of 278 feet) and it features the town cemetery. If you’re looking to discover some of those who have been buried in the city and have a thing for all things “haunted”, “ghostly”, or “deathly”, you should try hiking here. There are only about 40 gravestones but it is said that hundreds of people are actually buried here. This hike also features sweeping views out of the valley.

There is a scenic viewpoint you can drive to through the winding roads by red-colored rock cliffs and it opens up a view of the canyon down to below Verde Valley and the city of Clarkdale. Using this road, you can also connect through Prescott.

This Jerome Park is placed in the smack middle between Main Street and Hill Street, which you can access through the staircase shortcut. This small park has a playground for kids and a few picnic tables. Below this park, there are seatings laid against the bricks that divide this park where you can sit and hangout (it is right diagonally to The Connor Hotel).

Find A Place/Hotel To Stay