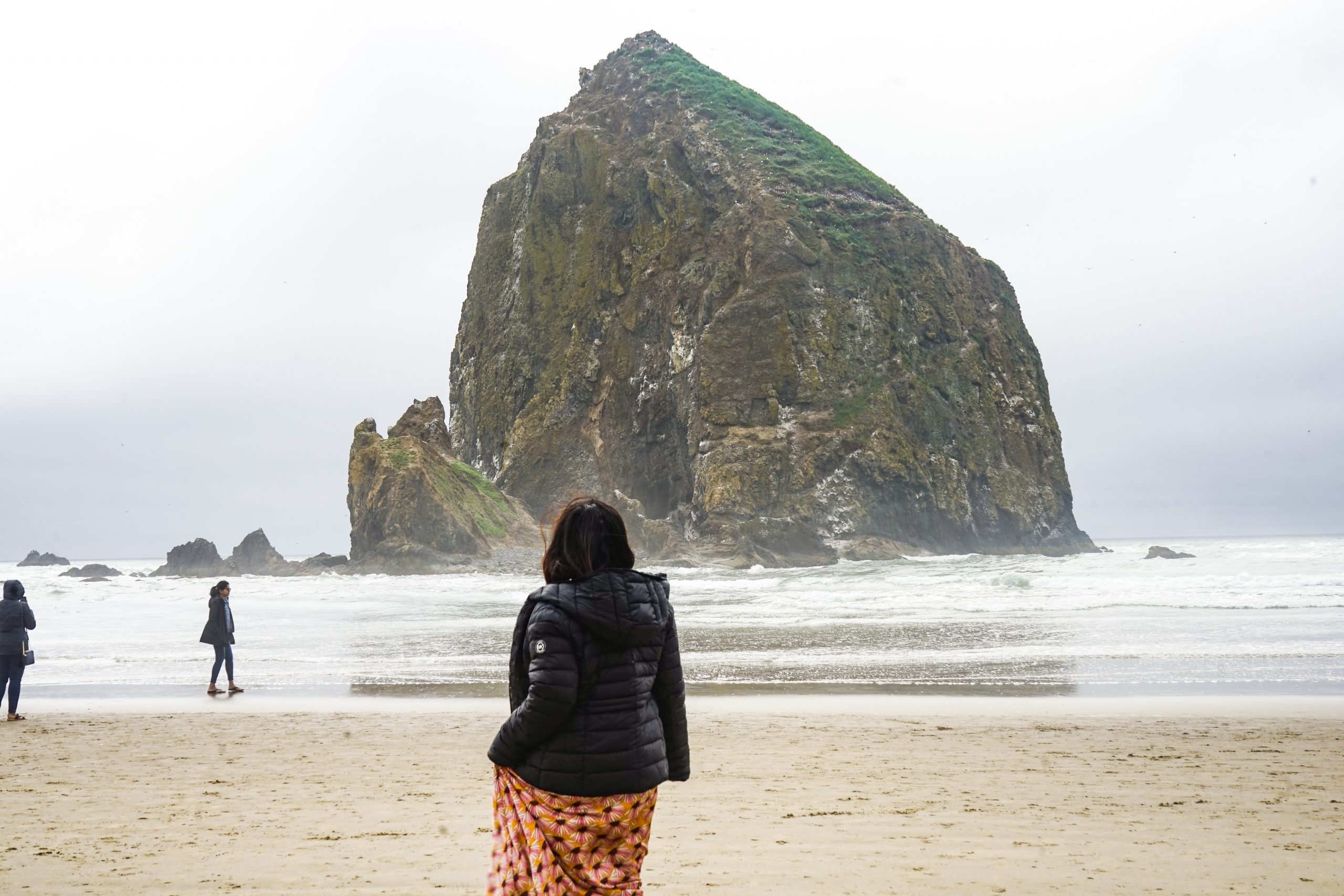 You’ve probably came across this iconic beach once while scrolling through your Instagram feed or somewhere on a computer screen saver. You know that huge rock that sticks out on the shore? That’s the 235-feet Haystack Rock located in Cannon Beach, Oregon. Cannon Beach is a beautiful beach that will absolutely be worth the drive to an hour and half away from Portland, if you’re coming that way!

For the longest time, I’ve always had Cannon Beach on my bucket list and I had to make it happen! Plus, it’s a good start to see the Oregon Coast for a start. I, however, wish I had more time to see more of the coast, but like I said it’s a good start. Getting to Cannon Beach from Portland was quite the drive and you’ll be expected to cross through a lot of diversified landscapes (which may blow your mind and that’s why Oregon is one of the prettiest states to see!) from farmlands to forests and to a change of weather.

When trying to get to this hidden spot, you’ll be expected to drive through the U.S. Route 26, which has a loongggg forest drive. The long highway drive is pretty scenic if you love the forests in Oregon and I do recommend stopping by this one log cabin-themed restaurant called Camp 18 if you ever need to stop by a gift shop, for food, or simply for a break — they have the best ranch chicken there!

Table of Contents show
1 Watch me explore it!
2 About Cannon Beach
3 Haystack Rock and other sea stacks
4 Ecola State Park
5 Other things you should know
6 Pin it!
6.1 Liked this post? Share this:
6.2 Like this:
6.3 Related

Watch me explore it!

Cannon Beach was listed as one of the most beautiful beaches by National Geographic in 2013. With just one glimpse, you’ll know why it is considered beautiful by NatGeo. The beach was also a territory of the Tillamook tribe, a Native American tribe from the coast of Oregon.

The name Cannon Beach came from the story when back in 1846, a cannon from the US Navy was found as it was washed ashore and it was rediscovered in 1898. That cannon is now displayed in a museum. An early coastal settler, James P. Austin named the area “Cannon Beach” in hopes of finding the lost cannon.

Haystack Rock and other sea stacks

The 235-feet rock is such a beauty to witness up close and personal!! I know for me, it absolutely blew my mind away. This rock was formed from volcanic lava flows that flowed from the Blue Mountains and along the route of the Columbia River and it had occurred about 15-16 million years ago. It had reached the sea and got pushed to the surface.

Aside from the famous Haystack Rock, you can see the other various sea stacks, the vertical column of rocks just like Haystack and are formed by the coastal geomorphology process that involve wind and water.

If you plug in “Haystack Rock Cannon Beach” onto your GPS (Waze, Google Maps), you can find parking right in front of the rock on Pacific Street, otherwise there’s a small parking area to find on the east side of South Hemlock Street near Viewpoint Terrace and a stairway that leads you directly to the sand and in front of the Haystack Rock. This is where I parked but I got lucky because there’s only 3 car spots that can park here.

There are a few places to view Cannon Beach from different angles and this is one of the best ways to see Cannon Beach from miles away and it’ll give you a different perspective. This place, Ecola State Park, just 3 miles north of Cannon Beach, is wonderful for sightseeing and offers picnic tables alongside the shore at an elevated area and you can even see the Tillamook Rock Lighthouse.

To get to this state park, you will have to drive up a narrow and steep hill through the forest. You can simply plug in the name into your GPS or use one of the coordinates of the trails to direct you. You’ll need to pay for a permit pass that you can get from one of the parking permit machines and it is a $5 day-use permit. You could also display an annual Oregon State Parks permit or Oregon Coast Passport that can be purchased from all major state park offices.

There are a few trails that you can do here that will give you sweeping views of the shore. These trails are about nine miles above the Pacific Ocean shoreline and this is called Tillamook Head. Here are some of the best trails you can do:

Other things you should know

The weather in Cannon Beach can drastically drop and be suddenly cloudy or foggy and windy from traveling from a different part of the state, per say, Portland, Oregon during summer months. Make sure to bring a heavy coat and/or a hat and scarf. The water is also freezing! You can swim here, but it is very very bone-chilling, so maybe consider a wetsuit first.