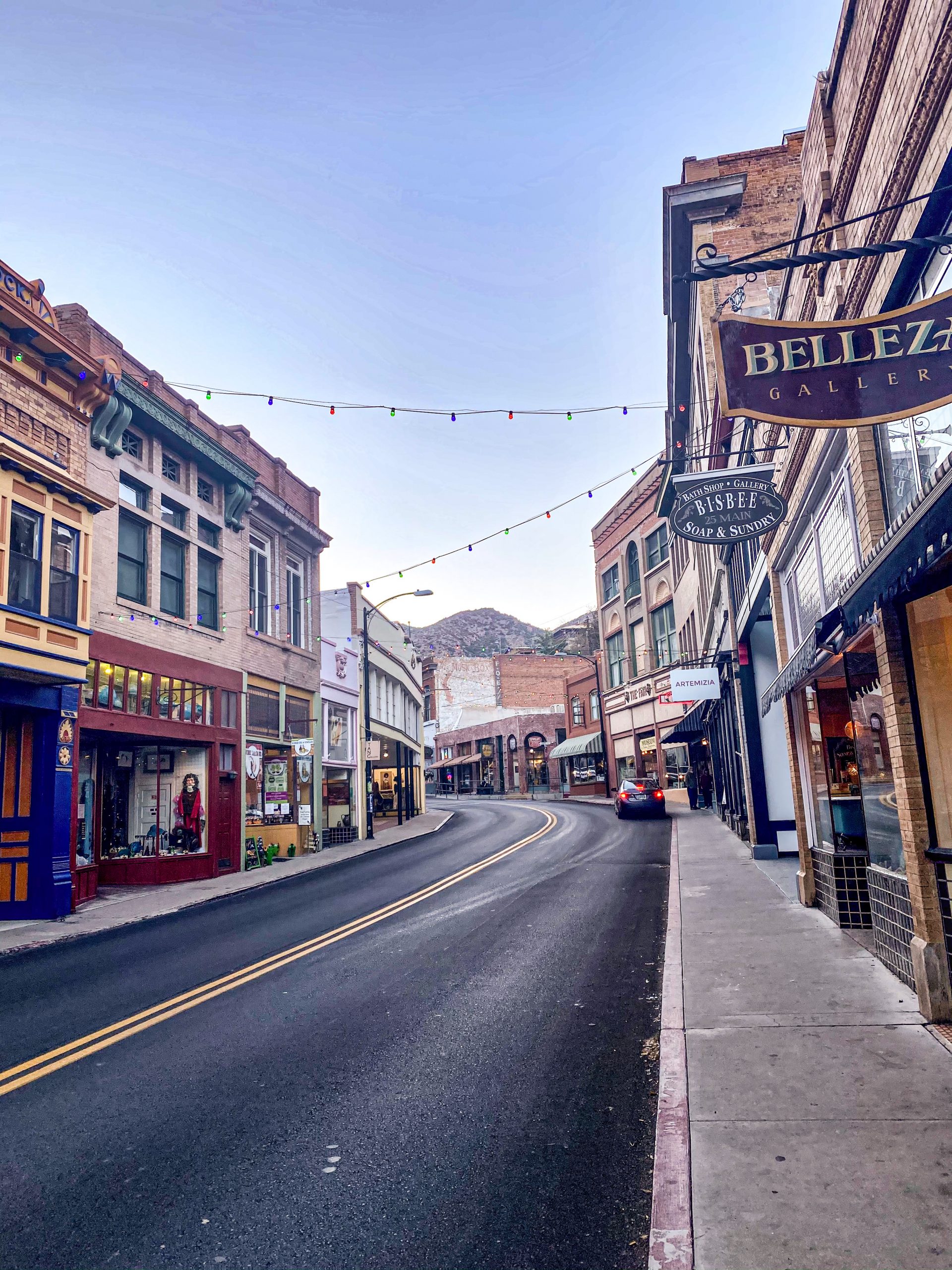 I went to visit the cities of Bisbee and Tombstone in Arizona shortly before a break up with my last ex-boyfriend almost a year ago, but who is to say I can’t share a trip that was actually quite memorable and fun to explore?!? Bisbee has been on my bucket list for as long as I can remember since moving to Arizona and I had to experience what the city has to offer so I can share some ideas.

If you’re looking for some spook and thrills this upcoming Halloween, then traveling to this city is for you! However, it is nice to visit here any time of the year. I visited it during the holiday season last year.

Located all the way down the southernmost of the border of Arizona and nestled among the Mule Mountains, Bisbee is known for being a copper mining town (and one of the richest mineral sites) but it is also filled with colorful architecture and a whimsy city atmosphere.

It is also known for being haunted with a couple of haunted stories that occurred around in the city and that is only something you may want to personally see for yourself as you explore some of these places. I will also be mentioning Tombstone, which is a city close to Bisbee (about 24-30 mins apart) and worth checking out for even a day if you have it!

The Shady Dell is a stop you’ve got to make if you love RVs and want to see fun different themes as each vintage trailer is designed differently. But essentially, The Shady Dell provides trailer and camping spaces. It started back for travelers who stopped by along the famous Highway 60 (like its famous brother Highway 66 haha). They also have Dot’s Diner, a diner that serves breakfast, lunch, and dessert food. You should also take a picture at its cute picturesque mural! (Yes haha, I indeed scribbled out my ex-boyfriend but I still love this pic!)

The Lavender Pit is an impressive and massive place and it is the epitome of how mining can create formations that actually appear beautiful. This now-abandoned pit used to be in production up to 1974 and a ton of copper was produced along with gold, silver, and even turquoise as by-products. Although the name seems rather a bit deceiving thinking you’ll find lavender there, this pit was actually named after a man named Lavender.

3. Stay at an Airbnb

There are so many cool Airbnbs to find around Bisbee and surrounding cities! The Airbnb I stayed at has to be one of the coolest ones I’ve stayed at, found by my ex’s mom. This Airbnb is called “Hacienda del Avion”, Spanish for “House of Airplane“. The whole theme of this house is indeed aviation, so if you’re into travel, aviation, or even a pilot, you’ll absolutely love to stay here. My favorite features of this Airbnb are the vintage clocks from different cities, the travel-related wall decor, and how nice each room feels. This Airbnb is also located by the Bisbee airport, so you might even get a few glimpses of seeing planes touch down. (OH and yes, this house has a garage for airplanes to be parked at — so freaking cool!)

I don’t know about you, but every time I go to a city, I really want to check out what downtown is like, if they have one. It is one of the most scenic places if you’ve seen pictures of Bisbee. Downtown, you can find galleries, quaint stores, antique shops, restaurants/cafes, and boutique stores. There’s not one specific store I recommend as each one has something nice to offer, but if you do want to see one of the smallest stores to walk-in, I recommend checking out “Killer Bee Guy” that sells local honey products (you can sample them beforehand!). There’s also the Copper Queen Plaza, which is a shopping mall and there’s good food here with quaint stores.

If you’re looking for decent places to eat, I recommend:

If you’re anticipating seeing a haunted place, you need to check out Copper Queen Hotel. Beautiful on the outside, it is also very elegant looking into the inside. It first opened in 1902 and remains as one of the longest operating hotels in Arizona. The hotel has a lot of Victorian-era styled furniture and rooms but it has modern-day amenities. During the holidays, the hotel is decorated with Christmas lights and a tree. I also recommend you check out the balcony to the top and look at the beautiful city and mountainous views.

Legend has it that there are at least 3 ghosts that live in the hotel, with the most known ones named Julia Lowell, a sex worker who committed suicide, and Billy who supposedly drowned in the nearby San Pedro River. Copper Queen Hotel is not shy to hide their haunted history.

This experience in the Bisbee Seance Room is definitely worth going to! If you’re into ghosts and paranormal stuff, you can really feel the ghostly vibes here. Not only will you learn the history of the city and more details on the hauntings around Bisbee as you sit around a table in a very dim lit room, but the host and magician Kenny Steward (also known as Magic Kenny Bang Bang) will entertain you with some magic tricks and with his priceless humor. But, you may be left wondering if it’s truly the magic tricks or paranormal activity happening…

Not located in Bisbee, but rather in Tombstone, this spot is really popular because of the story that happened on this site. You might’ve seen the movie, but this is the actual place where one of the most famous gunfights in America happened. Violent tensions occurred here on October 26, 1881 when there was a face-off between the Earp brothers and Clanton-McLaury Gang. You can see this gun-fight reenactment by watching a live-action show around the site (also the sound of blanks being used might be disturbing, just a warning if you’re sensitive to sounds).

Close to the O.K. Corral Gunfight Site, don’t miss out on exploring Old Tombstone too, which gives you the opportunity to really see what a “wild west” town looked like. There’s a lot to see here like a mini-golf course, restaurants, pan for gold place, and you can even ride a narrative trolley around. Their trolley also offers “Ghost and Murder” tours. One place I would not miss out on checking out is The Bird Cage Theatre, a theater that is reportedly known to be haunted and also there are bullet holes you can actually see that were shot there. There are a lot of antiques and old photos to view around here and if you are looking for more ghost tours, they offer one too. If you’re looking for a place to eat decent food, I recommend Mario’s Bakery Cafe.