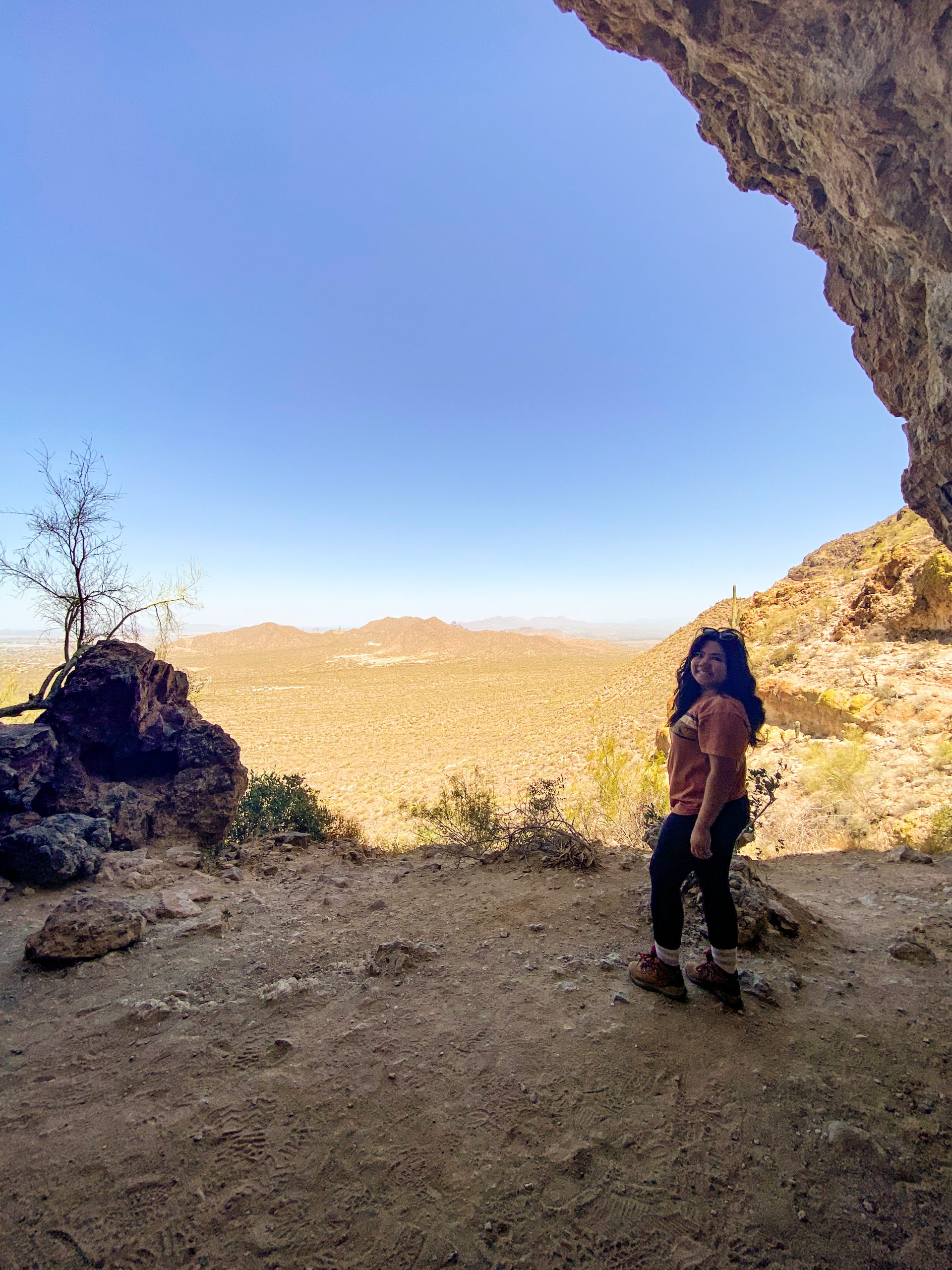 I am a sucker for exploring caves, especially through trails. Unbeknownst to many, Arizona actually has some great caves (or alcoves) to find through their geological trails, where many has to go and hike a bit of steep paths to get there. There’s one particular trail on my state’s hiking bucket list and that was Wind Cave Trail. Located in the city of Mesa, Arizona, Wind Cave Trail is situated right in Usery Mountain Regional Park.

It was my first time coming to the mountain park and it was a huge park to explore through. There are 3,648 acres of desert beauty here. Upon driving through the mountain park, you could get a glimpse of the huge “<Phoenix” sign.

There is a $7 permit fee to enter through the park. This trail, like I mentioned above, features a cave and actually, it has more than one cave to explore! You will be hiking up towards Pass Mountain, which features granite cliffs that have striking patterns all over it especially since there’s lichen on it. These granite cliffs were a result of hardened layers of volcanic ash about 14-15 million years old.

The hike is 2.9 miles long and it is an out-and-back route. You will gain an elevation of 800 feet. The trail is rated to be moderate, but it leans to be a bit challenging for beginners I’d say.

Although it’s called a “cave”, the caves you’ll see are accurately alcoves, which is when an exposed rock face or a cliff had became water eroded and it creates this arched shape. I’m not sure why they’re called caves in this instance, but its more likely because it would attract visitors to be excited about them.

There are many switchbacks to this trail. In the beginning, the trail is less rocky and is flatter surfaces with very minor switchbacks. As you keep walking out, the trail then becomes rockier.

Although you’ll already see the granite cliffs in front of you and its appearance looks to be much more upfront, it’s actually farther than it appears. Keep a look out for some smaller caves to hang out, which provide plenty of shade.

The closer you get to the caves, trails become more challenging with more switchbacks, becoming more steeper to hike up on, and then become rocky.

You’ll know that you got to the cave when you see a wooden sign that points to it and states “Wave Cave Trail”. As you turn around, you’ll see panoramic views of the city of Phoenix and the East Valley.

When you go to the further left, you’ll see another cave opening up. I personally liked this one better, although the other cave has green plants growing out of its cracks.

Other things to know about Wind Cave Trail

Overall, I think this trail is amazing. Not just because of its scenery overlooking desert atmospheres with many of Saguaro cacti and a mixture of other desert plants like barrel cacti and Palo Verde trees, but because there’s also wildlife to witness here.

You will see a lot of chipmunks roaming around because this area is home to cliff chipmunks. You may also get glimpses of beehives. And then when you make it to the top of the caves, you might find all different birds (like the hawks) hanging out on the granite cliffs.

There are a lot of intersecting trails going towards Wind Cave Trail as it may not be greatly marked, so I definitely recommend to download the AllTrails app and download the maps offline to better assist the correct ways to get up to the caves.

Pin it for later!

5 Signs of Burnout And How to Fix It

I Finished the 52 Hike Challenge and This is What Happened